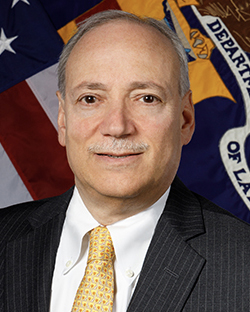 Pizzella previously served as a Member of the Federal Labor Relations Authority (FLRA) after being nominated by President Barack Obama and confirmed by the Senate in 2013. On January 23, 2017, President Trump designated Pizzella as Acting FLRA Chairman, a position he held until December 8, 2017.

Prior to joining the FLRA, Pizzella was Principal at Patrick Pizzella LLC. He served as Assistant Secretary of Labor for Administration and Management at the U.S. Department of Labor from 2001 to 2009. Pizzella was designated by President George W. Bush to serve as a member of the Board of Directors of the Overseas Private Investment Corporation from January 18, 2004, to April 26, 2005.

Previously, he worked at Preston Gates Ellis & Rouvelas Meeds LLP as a Government Affairs Counselor from 1998 to 2001 and Director of Coalitions from 1996 to 1997. From 1990 to 1995, Pizzella was Director of the Office of Administration at the Federal Housing Finance Board, and from 1988 to 1989, Deputy Under Secretary for Management at the U.S. Department of Education.

Pizzella received a Bachelor of Science in business administration from the University of South Carolina and he is a graduate of Iona Preparatory School. He is a native of New Rochelle, New York.