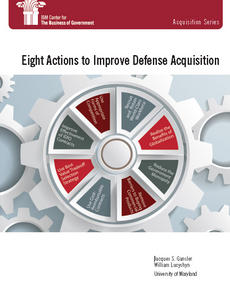 The Honorable Jacques S. Gansler, former Under Secretary of Defense for Acquisition, Technology, and Logistics, was a professor and held the Roger C. Lipitz Chair in Public Policy and Private Enterprise in the School of Public Policy, University of Maryland; he was also the Director of the Center for Public Policy and Private Enterprise. As the third-ranking civilian at the Pentagon from 1997–2001, Dr. Gansler was responsible for all research and development, acquisition reform, logistics, advanced technology, environmental security, defense industry, and numerous other security programs. Before joining the Clinton administration, Dr. Gansler held a variety of positions in government and the private sector, including Deputy Assistant Secretary of Defense (Material Acquisition), Assistant Director of Defense Research and Engineering (Electronics), Senior Vice President at TASC, Vice President of ITT, and engineering and management positions with Singer and Raytheon Corporations. Throughout his career, Dr. Gansler has written, published, testified, and taught on subjects related to his work. He was the author of five books and over 100 articles. His most recent book was Democracy’s Arsenal: Creating a 21st Century Defense Industry (MIT Press, 2011). ** ** ** William Lucyshyn is the Director of Research and a senior research scholar at the Center for Public Policy and Private Enterprise in the School of Public Policy at the University of Maryland. In this position, he directs research on critical policy issues related to the increasingly complex problems associated with improving public-sector management and operations, and with how government works with private enterprise. His current projects include modernizing government supply-chain management, identifying government sourcing and acquisition best practices, and analyzing Department of Defense business modernization and transformation. Previously, Mr. Lucyshyn served as a program manager and the Principal Technical Advisor to the Director of the Defense Advanced Research Projects Agency (DARPA) on the identification, selection, research, development, and prototype production of advanced technology projects. Prior to joining DARPA, Mr. Lucyshyn completed a 25-year career in the U.S. Air Force. Mr. Lucyshyn received his bachelor’s degree in engineering science from the City University of New York and earned his master’s degree in nuclear engineering from the Air Force Institute of Technology.