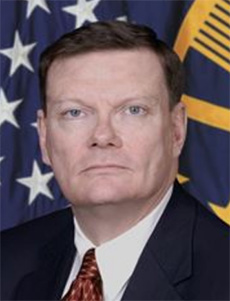 As DoD CIO, Mr. Halvorsen was the principal advisor to the Secretary of Defense for Information Management / Information Technology and Information Assurance as well as non-intelligence space systems; critical satellite communications, navigation, and timing programs; spectrum; and telecommunications.  He provided strategy, leadership, and guidance to create a unified information management and technology vision for the Department and ensured the delivery of information technology-based capabilities required to support the broad set of Department missions.

Before serving as the Department of the Navy CIO, Mr. Halvorsen was the deputy commander, Navy Cyber Forces.  He began serving in that position in January 2010 as part of the Navy Cyber reorganization.  Previous to that, Mr. Halvorsen served as the Deputy Commander, Naval Network Warfare Command.  He was responsible for providing leadership for over 16,000 military and civilian personnel and supporting over 300 ships and approximately 800,000 globally dispersed computer network users.  In this position he was responsible for the business performance of Navy network operations, space operations, information operations and knowledge management.

Mr. Halvorsen served as an Army intelligence officer in a variety of assignments, including Operations Just Cause and Desert Storm.  He holds a bachelor's degree in history from Widener University, and a master's degree in educational technology from the University of West Florida.  He is a Rotary International Paul Harris Fellow and an Excellence in Government Leadership Fellow.