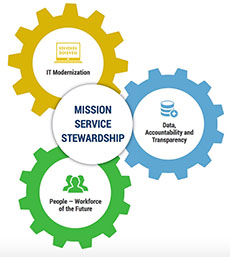 Wednesday, July 18, 2018
John Kamensky
Headlines have already faded from the recent release of the President’s long-awaited government reform and reorganization plan with its bold proposals to move organizational boxes between federal departments.

Skeptics call the President’s proposals to reorganize “boxology,” since they see them as merely shuffling around organizational boxes without anything actually being fixed.  Even a respected public management observer such as Donald Moynihan questions the Administration’s commitment: “Is it the nice, sensible documents that OMB puts out, or their actual management practice?”

But by digging beneath the surface, there does seem to be a degree of coherence and long-term vision within an overarching framework, with some committed commonsense leaders who are building on a foundation of reforms that have evolved over the past two decades.

A new report from the Government Accountability Office (GAO) offers a four-part framework to assess the reform agenda. Based on that framework, the Administration’s reform strategy reflects a number of hopeful elements.

GAO’s report begins with the observation that “The transformation needed to improve the performance of federal agencies is no easy task, however, and can take years to fully implement.”  It continues, noting that reform “is an immensely complex activity that requires agreement on both the goals to be achieved and the means for achieving them.”

The Administration seems to have absorbed this when it crafted its reform strategy. While the reform and reorganization plan released in June gleaned the most headlines, that plan is really only one element of a broader three-part strategy that has been rolled out over time, including the President’s Management Agenda back in April, as well as several less visible elements released earlier.

The President’s Management Agenda.  Presidents have developed management agendas since 2001, and Trump’s President's Management Agenda continues that tradition. However, his Agenda is not bounded by a two- or four-year frame focused on a small handful of specific management initiatives, such as expanding the use of shared services or improving cybersecurity.  Rather, it is a long-term vision that draws on “system-level thinking to tackle interconnected barriers to change, most notably related to aging technology infrastructure, disconnected data and an outmoded civil service framework.” The key leader for this initiative is the deputy director for management at OMB, Margaret Weichert. She describes the vision behind the Agenda as focused on three key areas:

She sees these as interconnected challenges. To symbolize this interconnection, the Agenda has adopted a logo of three intermeshed gears. And in going beyond this vision to action, the Agenda focuses on three “drivers” that she says are focused on attacking broad structural issues that have traditionally been barriers to transforming the federal government for the 21st century. These drivers include:

To act on these goals and drivers, the Administration turned to existing administrative mechanisms, such as those embedded in the GPRA Modernization Act, to implement specific elements of the Agenda. For example, it established a set of 14 cross-agency priority goals, with oversight by the President’s Management Council, to implement initiatives such as modernizing the federal government’s IT systems.  Each goal has designated leaders responsible for reporting progress on a quarterly basis.

The Reform and Reorganization Plan. The long-awaited, headline-grabbing reorganization plan released in June claims that better organizational alignment should “increase efficiency via shared services, public-private partnerships, workforce redeployments, and better customer experiences.” The three transformation drivers in the President’s Management Agenda, noted above, are seen as important support elements for the implementation of the individual reform and reorganization alignment initiatives.

The reform and reorganization plan prioritizes its proposed initiatives within a four-part framework:

Existing Administrative Routines. Probably the least visible and most important element of the broader reform initiative is what occurs at the agency level. By law, every agency’s strategic plan and priority goals were announced in February along with budget release. Reform initiatives have been embedded in these plans.  For example, the National Science Foundation has made it a priority to expand scientific partnerships with not only other federal agencies, but also with private industry, foundations, and international organizations. It anticipates that this approach will “accelerate areas of mutual interest” and better prepare the workforce for the future.

In addition, since late Spring, agencies have been undergoing annual strategic reviews of their progress towards their goals, jointly with OMB.  These strategic meetings help identify areas of potential concern but also help fine tune their efforts to incorporate reform initiatives and new priorities into their fiscal year 2020 budgets, which are due in draft to OMB in September.

OMB is also embedding reform priorities into other routine government processes. For example, it has for the first time defined agency customer service requirements as part of agencies’ budget development process.

When taken together, these three elements provide a comprehensive long-term strategic management reform agenda.  In fact, the Administration states: “The vision for reform must be multi-generational, enabling the Federal Government to adapt to changing needs over time. Rather than pursue short-term fixes that quickly become outdated once again this Administration will pursue deep-seated transformation.  But it will not happen in one or two years.”

But Can the Administration Deliver? There is always a risk of failure due to lack of leadership attention, given the many competing demands for time to address urgent but less strategic priorities.  For example, passing a budget before the end of the fiscal year always trumps the orchestration of large scale organizational culture changes. Even GAO’s reform assessment guide addresses this, encouraging the use of dedicated implementation teams to manage the reform process.

However, there are some reasons to be hopeful about the Administration’s reform strategies, at least in targeted areas:

First, there is a solid top leadership team – Margaret Weichert at OMB, Emily Murphy, administrator of the General Services Administration, and Jeff Pon, director of the Office of Personnel Management.  In addition, they are backed by a strong career team.  The primary concern from outsider observers is whether they will be distracted by other events, or whether they will stay in place long enough to act on the reforms.

Second, a solid governance system for managing governmentwide reforms has evolved over the past two decades, along with supporting processes for implementation of a number of the initiatives. This Administration is using this system and these processes and has not tried to replace them.  This includes the President’s Management Council, the various CXO councils (such as the Chief Financial Officers Council), the designation of senior leaders for each of the cross-agency priority goals, the use of annual agency strategic reviews, etc.

And third, there is a set of communicable, clear underlying principles for action, along with a set of positive, reinforcing messages internally within government. For example, OMB’s Weichert has been proactive in using social media to share the status of initiatives, she has established recognition programs for civil servants, and she has consistently reiterated that the reform effort is to “focus on aligning our resources to pursue what our federal employees want us to pursue, which is the mission first, service to the American people and fiscal stewardship . . .It was not an attempt to cut jobs.”

These hopeful elements all come with a caveat, of course: will the broader political atmosphere poison any potential for good will to act, even in areas where there is bipartisan or non-partisan support?