Creating IT Start-Ups in Government 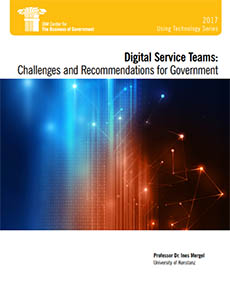 Wednesday, May 31, 2017
John Kamensky
The Administration wants to infuse private sector tech and know-how into government operations. It has created two linked offices in the White House to help lead the effort: the Office of American Innovation and the American Technology Council.

The current White House leaders of these offices have also inherited a capacity first created in the prior Administration that can turn the good ideas of these two offices in to action – the U.S. Digital Service and its counterparts in various federal agencies.  This “IT start-up” capacity was created as part of the response to the federal government’s inability to deliver an operational healthcare.gov website in 2013 – when leaders came to fully understand that the federal government did not have sufficient in-house IT capacity to deliver modern technology effectively for large and complex projects.

Background.  Governments across the world have committed to “digital transformation” of their services – using social media, mobile technologies, and other cutting-edge approaches both internally and with the public.

But the reality has been more prosaic.  Too often, “transformation” efforts are targeted at the project level, not at the government- or agency-wide level, and  led by technologists who put “IT first” and are not customer-centric.  And too often, agencies are overwhelmed by the need to keep existing legacy systems operating and don’t have the time or money to focus on broader innovations.  In fact, the Government Accountability Office found that more than 75 percent of all IT spending in the federal government is devoted to legacy systems.  At the same time, 94 percent of high-risk IT projects are over budget and behind schedule. – with 40 percent never being finished.

However, digital transformation is moving forward.  Government leaders in the US and globally have rethought their approaches and have adopted a more targeted approach – the creation of digital “SWAT” teams that focus on specific issues, that are semi-autonomous within government, and operate more like IT “start ups” than traditional government operations.

What Are Digital Services Teams?  Dr. Mergel writes that three types of digital service teams have evolved over the past six years that provide a different mix of technical capacity and innovation skills:

Dr. Mergel describes how digital service teams started in the UK in 2011 and how the concept was quickly adopted and adapted in other countries, such as the U.S., Denmark, Australia, Italy, and others.

And some are improvements to tech-related government processes, such streamlining the hiring of IT specialists and improving the buying process for IT products and services.  Similar stories abound for 18F and agency-level digital service teams.

Digital Service Teams Face Six Challenges.  Because digital service teams typically operate outside the traditional bounds of government operations, they face a range of challenges in being effective.  Dr. Mergel describes six such challenges, based on her interviews with pioneers in the field:

Embracing an agile development approach. Private sector tech companies have rapidly embraced the principles of “agile” – a methodology to rapidly develop functionality that focuses on the needs of end users.  This approach is antithetical to traditional software development (and project management) in government.  However, when top leaders serve as champions for this approach, it can be successful.

Attracting IT talent from the private sector. “Attracting IT talent from high-paying private sector technology jobs has been a long-term problem for the public sector,” writes Mergel.  But recent initiatives, such as the creation of the Presidential Innovation Fellowsprogram and the application of little-used existing flexible hiring policies, has resulted in a small but growing critical mass of tech talent in the federal government.

Maintaining and scaling a “start-up” culture in government. Mergel observes: “the internal bureaucratic culture of government has to dramatically change and existing processes have to be redesigned to fit the changing needs of citizens.” The “outsider” image of tech talent attracted to digital service teams have embraced this notion, but find the traditional bureaucracy “soul crushing.”  Resolving tensions between the new and old ways of doing business has been a key element in achieving success.

Improving the way IT is bought. Traditional acquisition approaches in government frequently result in cost overruns and schedule slippages, according to the Government Accountability Office. Two strategies adopted by the private sector, and used by digital service teams, has helped overcome the weaknesses of the traditional approaches: applying agile methods to the acquisition process, and adopting an “open by default” approach to project management.

Funding digital service teams. Transformational initiatives, such as the establishment of digital service teams, require longer-term fiscal commitments, “to give agencies an opportunity to strategically hire the human capital needed in the long-term,” observes Mergel.  The focus should be to “Buy competent teams, rather than buying a product.”

Addressing whether innovation should be “bought or built.” Can innovation in government products and services come from within, or is innovation exclusively in the domain of the private sector?  Mergel found in her interviews that the solution is not an “either-or” decision, but rather a “both-and” strategy.

Conclusions.  Dr. Mergel concludes her report with a series of recommendations to both digital service teams and policy makers, that largely promote a change in mindset rather than changes in processes.  For example, she recommends greater collaboration among digital service teams and agency chief information officers and program officials.  She also encourages digital service leaders to “challenge the traditional view” and being willing to “operate outside the existing norms.”

The White House has taken a keen interest in leveraging technology to transform citizens’ experience with government.  As noted earlier, the White House now hosts an Office of American Innovation and an American Technology Council, both of which have turned to the USDS team.  In addition, legislation to help modernize legacy IT systems across the government, which has been endorsed by the White House, recently passed the House and is now pending in the Senate. Taken together, these events suggest that digital service teams may become a fixture in government – while retaining their “start up” mindset!