A Dismal GAO Assessment – But a Ray of Hope 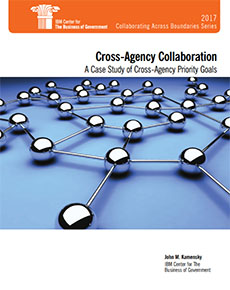 But there was a ray of hope embedded in GAO’s report.  The opening section assesses agencies’ progress in working together across organizational boundaries, noting “Many of the meaningful results that the federal government seeks to achieve . . . require the coordinated efforts of more than one federal agency, level of government, or sector.”  It observes that “collaboration across agencies is critical” and examines a range of approaches being used by agencies to address crosscutting issues.  GAO judged some approaches as making more progress than others.

One of the more successful approaches is the use of a relatively new statutorily-mandated authority, Cross-Agency Priority Goals, which requires the Office of Management and Budget to designate a small handful of priority mission-related and mission-support areas, covering a four-year period, along with the designation of a goal leader and a requirement for quarterly progress reports.

The Cross-Agency Priority Goals Process Works. GAO examined the executive branch’s application of the new law’s procedural requirements, but did not delve into the implementation and impact of the specific initiatives.  However, a new report by the IBM Center does assess the implementation of the first four-year round of Cross-Agency Priority Goals, which ended September 30th, concluding: “this approach does result in tangible outcomes.”

The IBM Center report assessed the implementation of the 15 Cross-Agency Priority (CAP) Goals put in place for the period of fiscal years 2014–2017. Of these, eight focused on mission-support-related goals, such as improving IT delivery, and seven focused on mission-related goals, such as improving the mental health of veterans

The actions taken within each of the CAP Goals have resulted in increased performance and results in several areas that, in a number of cases, had previously demonstrated little to no progress. For example, past efforts to coordinate permitting and review processes between agencies lagged until this initiative was designated as a CAP Goal.

Have CAP Goals Made a Difference? The wide range of initiatives undertaken makes it difficult to offer a general characterization of the impact of the 15 CAP Goals. There is no single scorecard. However, in a review of the publicly-available status reports and in discussions with governmentwide and project-level CAP Goal staff, there has been demonstrable progress across the board. Assessing progress and outcomes differs between the mission-support versus mission-focused CAP Goals.

For mission-support CAP Goals, progress can typically be assessed in terms of achieving greater standardization, consolidation of services and cost savings. For example, the Shared Services CAP Goal has developed standardized transition guidance for agencies to move common administrative functions, such as human resources management, to a shared platform, and agencies are beginning to make the transition.

For mission-focused CAP Goals, progress and outcomes tend to be more diffuse, but measurable in some cases. For example, the Climate Change CAP Goal—which stimulates federal renewable electrical energy usage—was able to demonstrate measurable decreases in greenhouse gases as well as increases in cost savings by federal agencies.

How Can the CAP Goal Process Be Improved? The overall implementation approach to the CAP Goals has been effective. There is no evidence supporting the need to undertake a major rethink, but there are opportunities to fine-tune processes and build on the foundation put in place. Governmentwide, there are several areas for potential improvement, including:

At the CAP Goal operating level, there are also several opportunities for improvement, including:

Conclusion.  CAP Goals, which are a new statutory tool for increasing collaboration across federal agencies to address complex challenges that span organizational boundaries, work.  The elements of the tool – a governance system, administrative processes, resources, and staff developmental capacities – have taken years to put into place.  The efforts to date have resulted in demonstrable improvements in challenges that have been facing federal agencies for years, such as improving federal buying strategies and cutting red tape in infrastructure permitting and review processes.  The processes and capacities developed to support this new tool can now be applied with greater confidence to a new set of challenges to be defined in coming months by the Trump administration when it proposes its set of cross-agency priorities goals in early 2018.