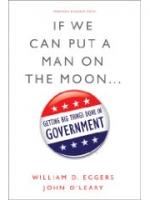 Tuesday, December 1, 2009
John Kamensky
The release of a new book, “If We Can Put a Man on the Moon . . . ,” by Bill Eggers and John O’Leary, helped set the stage for the National Academy of Public Administration’s annual meeting that centered on management issues related to health care reform.

The release of a new book, “If We Can Put a Man on the Moon . . . ,” by Bill Eggers and John O’Leary, helped set the stage for the National Academy of Public Administration’s annual meeting that centered on management issues related to health care reform.

The authors examine big successes undertaken by the government – like the Manhattan Project, the Marshall Plan, the Berlin Airlift, and the moon landing – and draw some lessons about what each took to be successful. They also contrasted these successes with failures such as Boston’s Big Dig, Iraqi reconstruction efforts, and Hurricane Katrina.

In surveys of senior career executives in the federal government, “60 percent said that government was less capable of executing large projects today than it was thirty years ago,” noted the authors.

The authors take on each of these steps, describing potential pitfalls as well practical principles, tools, and techniques to be successful. They provide entertaining, well-written stories of people and projects, from the efforts of Coast Guard Admiral Thad Allen in the wake of Katrina; to the implementation of the 2003 London traffic congestion charging program by Mayor Ken Livingstone; to the rolling blackouts in the California energy crisis of the late 1990s created by well-meaning but ill-designed state legislation, that led to the recall of Governor Gray Davis.

Their book contains insights and warnings helpful to the ongoing health care reform debate. For example, they note that poor policy design “occurs because the work of drafting a bill that launches a major initiative isn’t generally treated like the design process it truly is. Instead of a sound, executable design, the goal of the legislative process is often producing a bill that can pass . . . “ The authors continue, “Fully 45 percent of federal executives say that policy is rarely designed by those with relevant experience. The dramatic disconnect between policy designers and policy implementers is perhaps the most broken part of the journey to success.” They recommend role playing and scenario planning efforts, like those used by military strategists and the private sector before it launches major initiatives.

They conclude with a warning: “The tendency to see the enactment of legislation as an end unto itself, to claim credit for a great achievement upon the creation of a new law, is one of the most destructive tende3ncies in democratic governance.”

While Congress leads the legislative and policy design, the executive branch (and the Government Accountability Office) could proactively offer insights on the implementability of the pending legislation. Eggers and O’Leary offer an ideal(istic) approach, recommending an objective “implementation feasibility assessment” to be done by an independent review board, much like the Congressional Budget Office offers its independent assessment of the cost of legislation. However, that is not likely to happen any time soon!