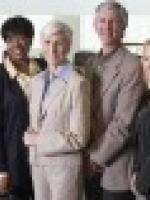 Thursday, September 3, 2009
John Kamensky
The Washington Post reports that the Partnership for Public Service released a study this morning describing the hiring needs of the federal government. The study, "Where the Jobs Are 2009: Mission Critical Opportunities for America," says that the...

The Post’s Joe Davidson, in an interview with the Partnership’s president, Max Stier, learned that the government actually needs to hire about 600,000 people by 2012 (replacing nearly one-third of the existing workforce) to backfill expected retirements and some new positions. But of these, 273,000 are “mission critical.”

Sixteen years ago this month, Vice President Gore’s National Performance Review released its initial report. Its most controversial recommendation: the federal government should cut its workforce by 252,000. These cuts were targeted at the “structures of control and micromanagement” and intended to empower line employees to focus on their customers and get their work done with less red tape.

What a difference 16 years has made!

Sixteen years ago, the concern was too much bureaucracy. One-third of the civil service was seen as working in “overhead” jobs – personnel, budget, contracting, auditing, accounting, headquarters, middle managers – and cuts were made. Part of the intent was to “reinvest” some of the staff cut from these positions into front-line service delivery, but that didn’t happen.

Interestingly, some of what was seen as “overhead” sixteen years ago is now seen as “mission critical.” The government is seen to need more contracting officers, for example. But the real staffing needs, according to the Partnership, are in three mission-critical areas: (1) medical and public health, (2) security and protection, and (3) compliance and enforcement. Here is a graph of other mission critical jobs.