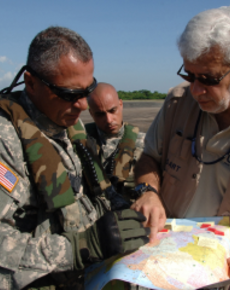 Based on scores of interviews with civilian and military leaders in the Afghan reconstruction effort, Dr. Yodsampa found: “Coordination, however, is easier said than done.  Agencies differ in their goals, priori­ties, and cultures. They compete for resources and turf. And they have different interests and concerns relative to coordina­tion itself. Coordination also takes time and money; coordination processes must com­pete for resources with other mission needs and priorities.”

The lack of joint civilian-military analysis and planning in the early stages of the Afghan reconstruction effort was reflected in the following interaction on the ground between a USAID and military official:

“A guy attached to the [military] civil affairs unit was sitting under a tree reading … I said, ‘You guys are funding his [the governor’s] militia, living in his compound, and supporting him.’ He replied, ‘Our objective is to fight and kill Al Qaeda and the Taliban. Your objective is to build a democratic central government. Right now, our objective is number one, and the consequences of our actions will be your problems in six months.’”

When Lt. General David Barno arrived in Afghanistan in October 2003, though, he had an explicit mandate to strengthen civil-military coordination, as did the new U.S. ambassador, Zalmay Khalilzad.  Dr. Yodsampa writes: “Together, the two leaders put in place systems and process that strengthened coordination.”  This included co-locating the offices of the general and the ambassador at the U.S. embassy compound in Kabul.  A senior military officer who served with them observed:

“Co-location . . . was a physical manifestation of integrated machinery. It meant that they got on exceptionally well, were able to talk through issues. They didn’t always agree, but the bond was so strong that they could work through any [issues] . . . They had a common purpose. Co-location isn’t essential, but it bloody well helps.”

Does Effective Coordination Depend on Personalities?

In her research, she identifies a small handful of systems and processes that she found were key to supporting effective coordination of results across agency boundaries in Afghanistan’s reconstruction efforts, such as road and school construction.

The case study of the evolution of civilian-military coordination efforts in Afghan reconstruction highlights four systems and processes that can help lay the foundation for consistent coordinated results. They are:

Dr. Yodsampa also observes that two additional elements are helpful in supporting these systems and processes.  These include paying attention to personalities and team dynamics, and jointly articulating shared goals and priorities up front.