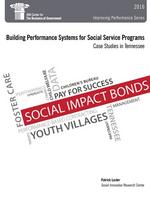 Tuesday, April 5, 2016
John Kamensky
The “pay for success” movement in the non-profit world is starting to take hold at the federal, state, and local levels. But a prerequisite is having some way of measuring success – and ensuring the funding models encourage it.

The Urban Institute has launched a new web resource to explain Pay for Success, which it says is various forms of performance-based contracting used to support the delivery of targeted, high-impact preventative social services where an intervention at an early stage can reduce the need for higher-cost services in the future. Pay for Success funding systems can take many different forms and already operate in different policy arenas. Lester says: “they include value-based payments to hospitals and nursing homes, performance-based contracts with workforce providers, merit-based pay in schools, and performance-based payments to colleges and universities.” These involve many billions of dollars in annual public funding.

Two of the most prominent of these outcome-based funding systems are Performance-Based Contracting and Social Impact Bonds. A new IBM Center report by Patrick Lester tries to address the question: When do you use one over the other?

What are Performance-Based Contracts? Performance-based contracting’s early roots were in weapon system development in the military. However, states and localities have developed similar forms of performance-based contracts to create financial incentives or penalties for providers to meet pre-defined performance benchmark targets in social services. This approach differs from traditional fee-for-service contracts that use fixed payment rates for services provided. In the case studies in Lester’s report, the performance incentives are to place children in permanent homes with foster families instead of housing them in group homes.

Performance-based contracting has been seen as problematic in harder-to-define social services because program evaluation studies oftentimes found no relationship between the metrics used and the results achieved. However, the author notes: “there is reason to believe that the success of previous pay-for-performance efforts has had less to do with the concept and more to do with execution.”

What are Social Impact Bonds? In 2010, the British government launched an innovative funding scheme, which it called Social Impact Bonds, where private sector investors committed funding upfront to pay for improved social outcomes that result in public sector savings. The investors were repaid by the government only when the outcomes were determined to have been achieved. This funding scheme has attracted substantial attention in the U.S. where it and many variations are being piloted, as noted in a report by the Government Accountability Office. Like performance- based contracts, social impact bonds tie payments to a provider’s performance in delivering outcomes. However, social impact bonds tie payments to meeting pre-determined performance goals. Payments are not made until results are achieved. This creates substantial risks for providers, but had attracted bipartisan political attention, and the attention of various non-profits, universities, and foundations.

What Are the Advantages of Social Impact Bonds Over Performance-Based Contracts? According to Lester, “Performance-based contracts and social impact bonds each have their own strengths and weaknesses, but many of them are complementary.” He says the advantages of social impact bonds include: The ability to measure the “impact” of what service providers do. Lester notes: “One of the greatest challenges faced by outcomes-oriented policies such as performance-based contracts is that improved outcomes do not guarantee im­proved impacts. Outcomes, like placing a child in a home, can reflect not only the work of a provider, but also other factors such the availability of foster parents, variations in the economy or local poverty rates, and potential perverse effects like cream skimming, tunnel vision, gaming, and fraud.”

Measuring impact—something the provider actually does to make a difference—can sort out these effects, says Lester, “but it requires a rigorous evaluation.” While evaluations of outcomes-based funding mechanisms are relatively rare for many programs, Lester says they are common for social impact bonds. More suitable as demonstration projects. Performance-based contracts are usually adopted at a system-wide level, usually the result of restructuring funding streams that already exist. However, social impact bonds are more often created as demonstration projects to prove the value of a new initiative, such as preventive services. Less likely to generate political opposition. Lester observes that systemic changes like performance-based contracts may generate opposition from existing service providers comfortable with established funding mechanisms. While social impact bonds may also draw opposition, the scale of smaller demonstration projects may generate less pushback than system-wide changes.