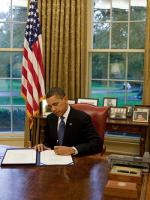 Thursday, January 6, 2011
This post is the first in a series on the recently-passed Government Performance and Results Modernization Act of 2010. The bill is 19 pages long and the media has not provided the level of detail that a performance wonk might find helpful. So I’ll be pro

The update is based on more than 15 years of experience – documented through numerous GAO reports that culminated in a 2004 overarching assessment.  This experience included both the evolution of agency practices as well as increased access to information and collaboration via the Internet.

The original 1993 law required agencies to create multi-year strategic plans, annual performance plans, and annual performance reports.  The new legislation makes some significant changes – about 150 actions by one count – to existing law and will take several years to implement.

Overview of New Law.  The new legislation creates a more defined performance framework by defining a governance structure and by better connecting plans, programs, and performance information.  As described in the Senate committee report, the new law requires more frequent reporting and reviews (quarterly instead of annually) that are intended to increase the use of performance information in program decision-making.

The law will likely change behaviors in the executive branch by creating a more explicit fact-based decision-making framework to implement programs and be more results-oriented.  Specific elements include:

Will Take Two to Tango.  But for the law to be effective, Congress may have to change its behavior as well.  For example, the law requires greater consultation with Congress in the designation of cross-cutting and agency-level priority goals, as well as in the development of agency strategic plans.  But to do this, Congress will have to find new ways to coordinate its own efforts across committee jurisdictions.  EPA and Homeland Security, for example, each report to over 70 committees and subcommittees, often with differing priorities, so Congress will likely have to find a way to coordinate internally in order to provide meaningful input.  This will only increase when the law’s provisions for obtaining congressional input on cross-agency goals become effective.

As noted earlier, I’ll be providing summaries and extracts from the legislation and the Senate committee report over the next few days. . . . or you can download and read the whole bill or the committee report yourself!

LATE ADDITION:  For those interested in a formatted version of these blog posts, here's an 8-page version!

EXTRA:  GAO staff developed a comprehensive overview of the law, which is now on SlideShare.