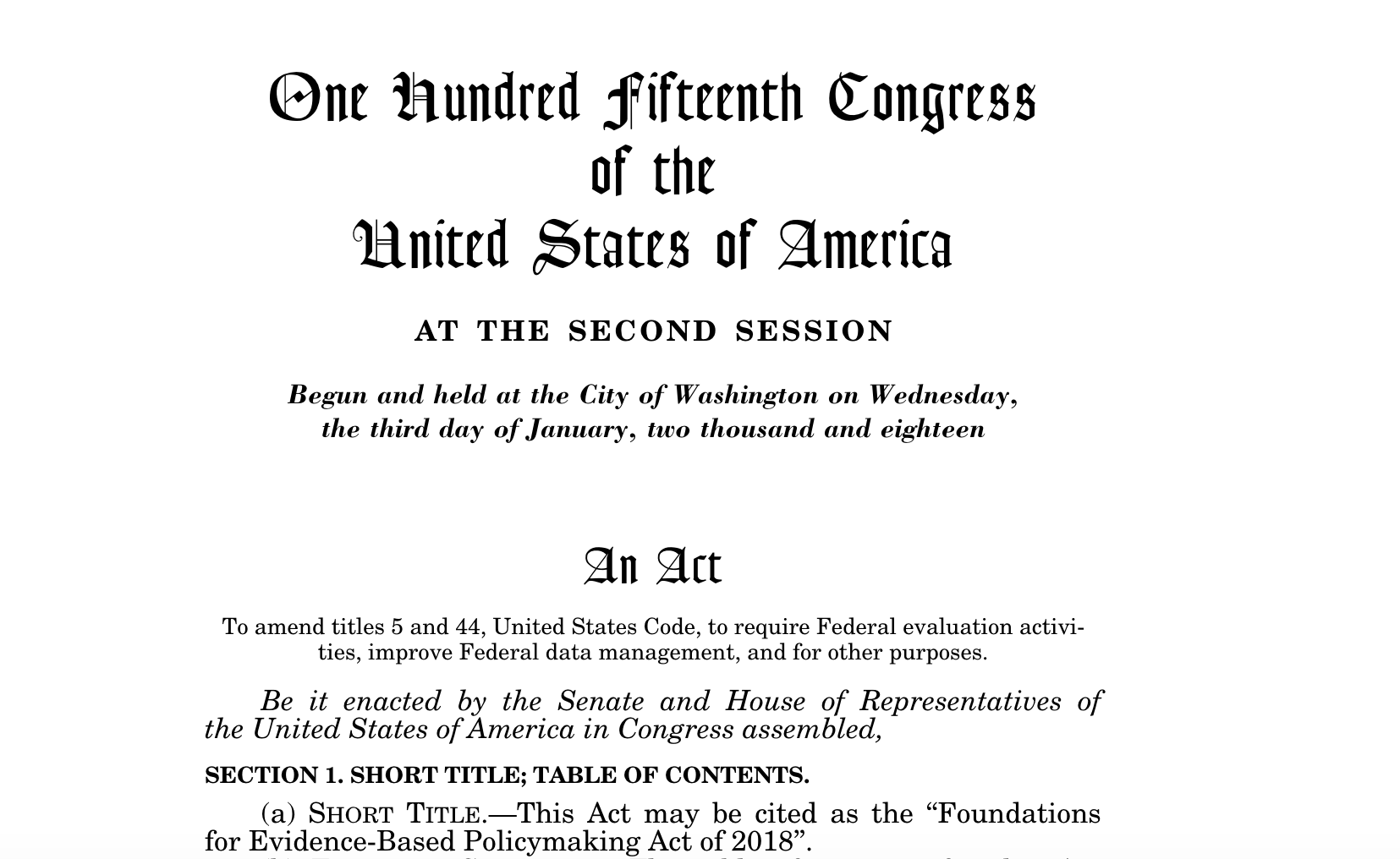 The recently released, highly touted Federal Data Strategy Action Plan turns out to be a key building block for the newly-released implementation guidance for the Evidence Act. That the Federal Data Strategy is but a single (albeit important) building block within this guidance shows how the Office of Management and Budget is sending a message to agencies that it is out to fundamentally change how the government will operate in the future.

The newly-released OMB guidance outlines a four-phase implementation strategy.  The guidance details Phase 1, with a promise for additional guidance to follow that will detail the subsequent phases.  The underlying message is: this is a big deal and OMB is committed to making it happen in a well-thought out, orchestrated fashion over the next three years.

Background. The Foundations for Evidence-Based Policymaking Act of 2018 was signed by the president earlier this year.  It covers three different, but interrelated topics:

The Act lays out a series of timetables for its various provisions, many of which require agency action within the first year. The OMB guidance provides details on how this will be done.

The OMB Guidance.  OMB says: “the Evidence Act creates a new paradigm by calling on agencies to significantly rethink how they currently plan and organize evidence building, data management, and data access functions to ensure an integrated and direct connection to data and evidence needs.”

It set the tone for this new paradigm by organizing an internal OMB working group that includes representatives from each of the relevant OMB offices to ensure a coordinated approach to developing guidance and implementing the data-related provisions of the Act. To my knowledge, this is a first. In the past, OMB has internally coordinated implementation efforts for other laws, but had not establish an ongoing working group to ensure sustained coordination over the years.

The Four Phases.  Following are the four phases that OMB says it will issue guidance on, over the coming months.  The newly-released guidance only covers Phase 1 activities:

Phase 1 Implementation.   The guidance includes details for agencies around:

Learning Agendas.  OMB says: “The Learning Agendas are, in many ways, the driving force for several of the activities required by and resulting from the Evidence Act. The creation of Learning Agendas requires agencies to identify and set priorities for evidence building, in consultation with various stakeholders.”

Personnel.  OMB says: “The newly-designated positions (Chief Data Officer, Evaluation Officer, and Statistical Official) all play a key role in leading these activities, including addressing the new reporting requirements. Their corresponding interagency councils likewise support these functions and roles. These senior officials will also serve on a newly required Data Governance Body inside their agency, which will set and enforce priorities for managing data as a strategic asset to support the agency in meeting its mission and, importantly, answering the priority questions laid out in the agency Learning Agenda.”

Planning. The Evidence Act weaves its requirements into existing administrative routines instead of creating another stovepipe of activities.  It ties to the ongoing agency strategic planning activities required under the Government Performance and Results Modernization Act of 2010, OMB budget guidance, and existing agency-specific management routines, such as through data-driven performance and strategic reviews. The Evidence Act guidance does add two new routines: developing annual evaluation plans and undertaking assessments to determine agencies’ capacity to undertake data and analytic efforts.

Timetables for Action.  The OMB guidance includes a series of deadlines for agency action around each of these three steps.  The first deadline is on Friday – July 13th – when the 24 largest agencies are expected to designate senior officials (who meet the qualifications outlined in the guidance) as their agency chief data officer, chief evaluation officer, and statistical official.

The next major deadline is in September, when agencies are expected to document their progress in developing their first learning agendas to OMB along with their 2021 draft budget requests. . . . This will make for a busy summer within many agencies!