How to Prevent Soft-targeting in Government Performance Management Systems 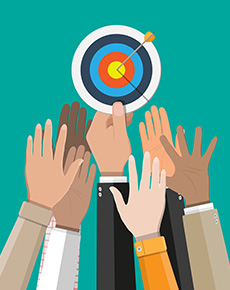 Monday, December 11, 2017
Prajapati Trivedi
We do not have to be a trained psychoanalyst to know this much — we humans are wired to seek pleasure and avoid pain. Referred to as the “pleasure principle” it was made famous by Sigmund Freud in German as “lustprinzip.”

It is, therefore, hardly surprising that the preference for “soft-targets” is a near universal phenomenon. Anyone designing a government performance management system (GPMS) must assume we humans have a preference for soft targets.

Given this seemingly reasonable assumption about human behavior, the key to designing an effective GPMS lies in creating protocols that tend to create incentives for those covered by the GPMS in such a way that the pursuit of one’s own ‘self-interest’ promotes the desired ‘public interest.’ I have found following design elements to be helpful in this regard.

1. Require government agencies to place their annual targets on the internet at the beginning of the year.

Transparency is an effective antidote to soft targeting. Once the targets are made public, it allows (a) concerned citizens, journalists and analysts can see whether they match the budget provided for the targets, and (b) experts to benchmark targets with respect to comparable organizations and functions. Further, the risk of appearing as a ‘shirker’ among peers tends to motivate agencies to reveal their true potential.

2. Require government agencies to provide trend data with respect to each target.

Government agencies often do repetitive tasks — collect taxes, build and maintain bridges, treat veterans, build schools and so on. Hence, as in the table given below, for most important targets it is possible to require agencies to provide historical data (and indicative trend) with respect to the key performance indicators (KPIs).

This requirement to provide trend data ensures (a) agencies suddenly do not provide a target for the current year which is significantly lower than the actual achievements in the past, and (b) the projections for future are also realistic. Of course, there are circumstances when past is not a good predictor of future. Having a requirement for providing the above table ensures that a conscious decision is taken in this regard. Agencies should provide a narrative description if significant changes are made.

Many countries have successfully created an independent body of non-government experts consisting of former permanent secretaries, leading academics, CEOs of private and public enterprises and other recognized domain experts. Often known as an Advisory Task Force (ATF), they vet the targets at beginning of the year and also vet achievement at the end of the year. They are often called to also decide whether the explanation for non-achievement of a target is a valid one (a genuine unknown unknown). The existence of such a competent neutral expert body and the danger of being exposed by them, ensures government agencies propose realistic targets. In the American context, this group could easily come from the Fellows of the National Academy of Public Administration (NAPA).

Good management includes the ability to set realistic targets. If a government agency beats a target by 100 percent or even 1000 percent, and there is no good explanation, then this achievement should be suspect and invite some negative consequences and the overall performance assessment of the agency (or management) should be downgraded appropriately.

5. Make performance the assessment of the agency depend on the quality of its KPIs.

If the Titanic is sinking, there is no point in arranging chairs on the deck. Similarly, if the quality of KPIs is a poor measure of the actual work of the agency, having ‘realistic’ targets is not likely to be a great help. The following heuristic equation captures the essence of this above argument:

6. Impose a statistical protocol for deciding level of targets.

The South Korean government is first credited with the use of the statistical concept of ‘normal distribution’ in the context of a GPMS for their state-owned enterprises (Government Invested Enterprises). As depicted below, according to this rule, performance along a trend line was considered average and one standard deviation above trend was good and two standard deviation above trend was designated as excellent.

This statistical rule-based approach was found to mitigate against the tendency to negotiate softer targets.

7. Agree on How to Measure Deviations from Target

As I have argued in an earlier column, a single-point targets create a “yes/no” option and thus encourages a tendency for a soft target. As argued elsewhere, a scaled-set of targets allows an agency to agree to a challenging target as any slippage from target for “excellent” will not necessarily mean “nil” performance.

While each of these seven protocols have been tried successfully somewhere, GPMS designers have to decide which ones will work for them in their context.