Leadership: It Depends on the Deck You've Been Dealt (Part 4) 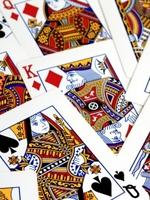 But in reality, the success of a leader depends on the context, or environment, in which they work – the deck they’ve been dealt. Even the heroes.

But as the context – the workplace, the workers, and the work – change (because we are in more of a knowledge-based economy) -- a different type of leader tends to be more successful, especially when the challenge is cross-agency and/or cross-sector. The “lone hero” isn’t always the most effective leader in this new world.  In fact, the best leaders tend to share leadership in any large-scale change effort.  For example:

Each of these leaders were successful and used many of the same approaches in their leadership.  In fact, these steps were identified and analyzed.

Leading Change.  Harvard Business Professor John Kotter wrote a book back in the mid 1990s – Leading Change – that centered around his observations of what successful change leaders did in common.  He describes eight steps leaders take.  These steps seem to be relevant to both an agency-centric environment as well as a cross-agency environment when a transformation is afoot:

Step 1- Establish a sense of urgency

While these steps seemed to be common among successful leaders, how they were applied differed, largely because they face different operating environments.

Context Matters.  Leadership occurs within a specific context – an emergency such as a flood, a political crisis such as those Lincoln faced, action on the battlefield, or in the board room.  There is also an organizational and legal context, as well, that shape the options you can take.  For example, Adm. Thad Allen’s leadership role in responding to Katrina depended on his legal authorities under the Stafford Act.  There, he had to defer to state and local leaders.  But the authority and accountability he had in the Gulf Coast BP Oil Spill were far more centralized and he had very different interactions with the same players.

Shaping an Organization.  So, how a leader responds depends on that context.  But if a leader has some control over a situation – such as a planned organizational transformation, or participation in a broad, governmentwide initiative, then he or she can help shape the direction it goes.  Here are some elements that leaders in a shared leadership environment that is undergoing a transformation keep in mind:

First, the role of the leader is to define – or more likely redefine -- what constitutes the organization – because the work, or the mission, often reaches beyond what any one organization can accomplish.  An organization may provide the foundational mission-support capacity, but the real work gets done elsewhere.

Second, a leader has to redefine what his or her “organization” is and who are its “employees”  -- because oftentimes those who can get the work done are not employees who work for the organization, and the leader has no authority over them.  This could be other agencies, or nonprofits, or even the agency’s customers (see the recent IBM Center report on co-delivery of government services by citizens).

Third, leaders in knowledge-based organizations often come from the middle, or the front line of the organization. There is a shift in many organizations that are network-based from formal positional leadership, to reputational leadership.  This means empowering leaders in networks – who generally have little formal positional authority --- to get things done. This is especially true with workers in the Millennial Generation.  This could mean leading via social media, or other on-line collaborative devices.

And fourth, within an organization, the role of the leader is to create the capacity and structures for the organization to lead itself.  This isn’t a new concept.  Admiral Lord Nelson did this before the Battle of Trafalger in 1805.  He ensured he had strong, experienced commanders.  He gave them a clear operating picture of what they faced and how they should act and respond.  And then once the battle started, he was mortally wounded.  He won, even though he never lived to see it.  His leadership was completed long before the battle.

Nelson has been treated by history as a hero, but he was a pioneering network leader.   Today, new forms of shared leadership are evolving – where a leader serves as a visionary, a broker, a convener, a mediator.  And occasionally is recognized as a hero!

Other Blog Posts in This Series: