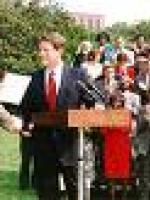 Monday, September 7, 2009
John Kamensky
Sixteen years ago today Vice President Gore presented the first report of the National Performance Review to President Clinton in a ceremony on the South Lawn of the White House. At the time, I was on the NPR staff and thought that the six-month review..

Sixteen years ago today Vice President Gore presented the first report of the National Performance Review to President Clinton in a ceremony on the South Lawn of the White House. At the time, I was on the NPR staff and thought that the six-month review was over and that we’d all be going back to our home agencies. But it turns out that ceremony was just the beginning.

The report contained nearly 400 recommendations with over 1,200 specific governmentwide and agency-specific action items. Vice President Gore asked a small group of the more than 250 staff on the original reinvention team to remain behind. I was one of the few to continue, being asked to help implement the recommendations. The effort extended to the end of the Clinton Administration and claimed a number of successes.

While I thought the purpose of the small group was to implement the recommendations, the project director, Bob Stone, thought its purpose was to change the culture of the government to be more customer-focused, help agency managers cut red tape, and to empower front-line employees to get their jobs done. He taught us all quite a few things!

Put Customers First. The Review recommended putting customers first. President Clinton did this by directing agencies to set customer service standards for every government program and agency. It took almost a year, but thousands of specific standards were set (in fact, there is legislation pending today to reinstitute standard-setting, but it has not gone anywhere). But this wasn’t culture-changing. Bob encouraged agencies to create “reinvention labs” to try out new ways of improving customer service. Agencies created hundreds.

Cut Red Tape. The Review recommended cutting red tape. The Labs tested out ways of doing this too. The President directed agencies to cut the number of internal regulations. Agency heads were encouraged to grant Labs waivers from agency-imposed internal rules so the Labs could try new ways of doing things. But this wasn’t enough. President Clinton issued a governmentwide memorandum that changed the burden of proof for those seeking waivers. Instead of having to demonstrate why they wanted a waiver, their bosses instead had to demonstrate why they shouldn’t provide a waiver. Talk about revolutionary!

Empower Employees. The Review recommended empowering employees so they could get their work done, serving citizens. President Clinton directed agencies to expand supervisor-to-employee ratios from 1:7 to 1:15, and to created labor-management partnership councils. Bob went further. He identified teams of employees that were living reinvention principles and convinced the Vice President to create a whimsical “Hammer” award (symbolizing breaking down bureaucracy). Over 68,000 employees participated in teams receiving these awards.

Cut Back to Basics. The Review also recommended “cutting back to basics,” recommending more than $100 billion in savings (which seemed like a large number at the time!). Doing work differently, cutting administrative overhead, and eliminating obsolete programs (like the Tea Tasting Board) resulted in savings totaling in the billions of dollars. There was controversy about the sources of the savings (largely by streamlining the procurement process and reducing headcount) and how to count those savings. But the public saw reductions.

The ultimate metric of success for the reinvention effort was increased citizen trust in the federal government to do the right thing most of the time. That metric increased from 21 percent in 1994 to 44 percent by 2000, according to a biennial survey by the University of Michigan.

So in the end, reinvention wasn’t just about recommendations completed, laws enacted, or savings claimed. It was about changing how citizens saw their government and how government employees saw themselves.

As President Obama sets out to "make government cool again," maybe there are some opportunities to revisit some of the lessons of reinvention!