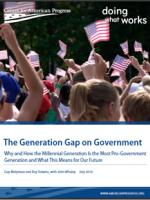 Wednesday, July 28, 2010
Gadi Ben-Yehuda
Americans, especially millenials, want better, not smaller gov’t, according to a recent survey. Why is this, and how can gov’t employees deliver?

The Center for American Progress (CAP) found that millennials, defined as Americans between the ages of 18 and 32, have far greater faith in and expectations of government than their older compatriots.  This proved true regardless of political affiliation or ideological bent.

Two graphs from the report, “The Generation Gap on Government,” drive home the point.  I think there are two questions that flow from the data, and a third that makes it actionable.  The first is: does their attitude simply reflect their youth?  Had CAP been around to perform this survey in the early 60s, would they have found the same generation gap in attitudes?

Before we answer the questions, let's look at the graphs (click on each to enlarge).  The first is a chart that shows that millennials have a more positive view of government across ideologies and party affiliation.

Let’s assume for a moment that millennials’ attitudes are not merely a reflection of their youth, but rather of their particular history.  The second question is: Why should they have more faith in and expect more of their government than their elders?  To make the data actionable, we must ask: how can bureaucrats repay that trust to keep faith with the new generation?

Why do millenials feel differently than their elders?

I think there are three historical factors:

Simply put, the three generations prior to millennials either were promised the moon (literally, in the case of the boomers) and saw their governments persistently fail at keeping their promise.  The Boomers (born 1946-1954)  saw the dreams of Camelot and the Great Society give way to the upheavals of the late 60s; Jonesers (b. 1954-1965) reeled with their country as Watergate unfolded and Nixon resigned in disgrace, only to emerge into Carter-era malaise; Gen X (b. 1967-1977) came of age just in time for the stock market crash of 1987 (still the largest ever by percentage) and enter the workforce in the recession of the early 90s—the youngest Xers (like myself) were also the smallest cohort ever, making us an unattractive and therefore easily-ignored consumer market.

Conversely, millenials (b. 1978-1990) are a larger generation even than the Boomers.  They were born under Reagan, came into full consciousness around the time Clinton declared “the age of big government. . .  over,” and entered young adulthood under Bush, whose administration embodied the dictum “government never of itself furthered any enterprise but by the alacrity with which it got out of its way.”

They were not promised much by their successive governments. Having their expectations set as low as possible, they were never let down.  What CAP found, unsurprisingly, was the millenials want better, not smaller government.

2. Belief in separate spheres of private and public sector.

A second reason for this attitude is a keener understanding of the different functions of the public and private sectors.  Despite the move toward increased corporate social responsibility (CSR), millenials have grown up in the world of Gordon Gekko.  They have always lived in a world in which the idea that the private sector has as its highest value the drive to make money for shareholders.

But the role of government is also well-defined for them.  In addition to regulating the economy (with the lightest touch possible, of course), and defending the nation, the government should provide essential services that are not in the scope of private industry for whatever reason.  Another graph from CAP’s report makes this clear.

So they want a better, not smaller government, and they want it to do what the private sector either can’t or hasn’t yet.

3. Understanding of the power and role of governments as demonstrated through social networks.

The reason for this may lie in the media environment in which millenials thrive: the interactive internet.  LiveJournal, a popular and prototypical blogging platform, launched when the cohort was 9-22 years old, and MySpace launched only four years later, making millenials a prime audience: 13-26.

Their proficiency in digital and social media grew with the media themselves.  They saw the power of huge groups brought together through ad-hoc organizations (starting with meetups for Howard Dean, moving on to MoveOn.org activities, and culminating in Barack Obama’s election thanks in part to digital organizing).

It’s not hard to extrapolate from the small groups achieving small goals—meetups to repair playgrounds, etc.—to large groups achieving large goals.  Any millennial with internet access can create a Google group and she’s off to the races; and along the way she learns that what starts online can very quickly have an impact in the real world.

Imagine what could be done if, instead of Google Groups, you had the resources of, say, the Corporation for National and Community Service at your disposal?  And instead of relying solely on word of mouth or Facebook, you could talk to the Washington Press Corps?  That’s the organizing power of government as seen from the perspective of a millennial (and also Tim O’Rielly—it’s what “Government as a Platform” is all about).

To recap: millenials have more confidence in and expectations of government, and intrinsically understand ‘government as a platform.’  What should government executives and managers do about it?

How can government executives and program managers keep faith with millennials?

This question was also addressed by CAP at a panel discussion with Sir Michael Barber, the former head of the Prime Minister's Delivery Unit under Tony Blair.  He said that what really grabs headlines is the way a government handles (or mishandles) a crisis.  But what changes people’s lives is how a government handles routine functions; everything from pothole repair to ensuring all government Web sites are active and populated with accurate content.

With typical British understatement, he summed up how neither journalists nor historians cared much for implementation, but rather concentrate on strategy and policy.  He said, “You read: ‘Henry VIII gathered an army.’ Really? He did it himself, did he?”

“The Generation Gap on Government,” is interesting, at times inspiring, and always sobering.  And all government employees—political and career alike—should read it, especially if they want to enjoy the kind of public support that the graph below shows is possible.  CAP's survey shows that Americans want better, not smaller government, the kind that’s delivered day after day and hinges not on ideology or politics, but on pragmatic assessment and competent implementation.