New Directions for Government in the Digital Age 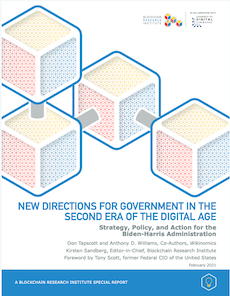 Over the past few decades, economies and societies around the world have been going through historical transformations as they transition from the industrial age of the past two centuries to a 21st century digital age. Companies - especially large, global corporations - have leveraged digital innovations to improve their productivity and competitiveness and adapt better to these powerful technology and market changes.

In 2010, the Technology CEO Council released a report recommending that governments embrace the information technologies (IT) and organizational best practices that the private sector was successfully applying: “By harnessing major technological shifts and adopting best business practices, we can not only make our government far more productive, but also foster greater innovation in areas ranging from healthcare to education and energy - innovation that will generate economic growth and job creation.”

But governments have continued to lag the private sector, and risk falling further behind as the pandemic accelerated the digital transformations that are helping companies cope with the crisis. “We’ve seen two years’  worth of digital transformation in two months,” as companies adapt to stay open for business “in a world of remote everything,” said Microsoft CEO Satya Nadella in April 2020. A month later, McKinsey & Company added, “We have vaulted five years forward in consumer and business digital adoption in a matter of around eight weeks.”

The authors of a recently published report, “New Directions for Government in the Second Era of the Digital Age,” argue that governments should exploit this fast-moving era of technology in their own operations, for the overall benefit of their nations. The 120-page report was authored by Don Tapscott, Kirsten Sandberg, and Anthony Williams from the Blockchain Research Institute (BRI), in collaboration with the Chamber of Digital Commerce and experts from several countries. The BRI is a global think tank dedicated to the strategic implications of blockchain and related technologies to business, government and society. I am a research contributor at the BRI.

The report aims to assist government leaders around the world, but is particularly focused on the opportunities and challenges facing the new US administration.

In the foreword to the report, former Federal CIO Tony Scott notes that the federal government’s IT system are “a patchwork of old technologies with layers of modern ones. … As the world digitizes nearly every consumer and business experience, federal systems are increasingly out of step with the expectations of US citizens. The US federal government spends more than $90 billion per year on federal IT, and most of that (> 90%) goes toward ‘keeping the lights on.’” This is out of line with the 60% to 80% spent by large modern enterprises on operations and maintenance, with the remainder going to the development of new and expanded capabilities.

The report’s authors recommend a series of actions in five broad areas that would help fight the pandemic, rebuild the economy, and position the United States for longer-term leadership. Let me briefly summarize key recommendations in each area.

Given our increasingly digital new normal, the US government must make safeguarding digital infrastructures from cyberattacks one of its top priorities. SolarWind is but the latest in a long list of suspected Russian cyberattacks that breached numerous government and business systems around the world. Moreover, data breaches, large-scale fraud, and identity theft have become more common. In a world increasingly driven by digital transactions and data, our existing methods for managing security, privacy, and digital identities are far from adequate.

Identity plays a major role in everyday life. Our identity is the key to the particular transactions in which we can rightfully participate as well as the information we’re entitled to access. Think about entering an office, boarding a plane, logging on to a website, or buying things online. We generally don’t pay much attention to the form or management of our identity credentials unless we are denied these privileges or someone else hijacks them.

The United States should lead in helping individuals “own their data, using it to plan their lives, monetizing it, protecting their privacy and data security, and making it available as appropriate for societal reasons, such as health data in a pandemic,” according to the BRI authors. To do so effectively, every citizen needs a self-sovereign digital identity: “The government should encourage the numerous efforts underway that use blockchain in protecting identity and utilizing user data confidentially.”

Given the inherent differences between business and government, public sector leaders will want to question the extent to which they can apply good ideas and best practices from the private sector to their work. After all, there is a huge difference between the key objectives of business - for example, managing revenues and profits; acquiring and retaining customers - and the objectives of a democratic government to safeguard its citizens’ rights to life, liberty and the pursuit of happiness.

But, there are also many similarities. Large government institutions and large companies are both complex organizations employing many people and delivering services to many more - be they citizens or clients. Both operate in increasingly fast-changing environments, which are subject to more frequent, serious, and unpredictable problems, as evidenced by COVID-19. Both have access to innovative technologies and management practices that can aid significantly in dealing with their complex operations. And, regardless of whether serving citizens or clients, both can greatly benefit from running more efficient, high quality, and innovative organizations.

“While the federal government has made progress in its use of digital technologies in redesigning and digitally delivering services to individuals and organizations, leadership must work across agency silos in terms of culture and service innovation,” the report’s authors write. “The new administration needs a kind of domestic ‘Digital Marshall Plan’ to coordinate all federal chief information officers as well as changemakers among career IT civil servants including those at state and local levels.”

Reboot America’s innovation economy to include a diversity of entrepreneur

Entrepreneurship has been declining for years. In their book, The Other Aging of America: The Increasing Dominance of Older Firms, economists Ian Hathaway and Robert Litan wrote, “Like the population, the business sector of the US economy is aging. Our research shows a secular increase in the share of economic activity occurring in older firms - a trend that has occurred in every state and metropolitan area, in every firm size category, and in each broad industrial sector.” Business failure rates have steadily increased for all except mature firms - those 16 years or older - whose failure rates have been flat for the past 20 years. Failure rates have been particularly high for early-stage firms, especially since the 2000 dot-com crash.

Should we be concerned by this shift of economic activity toward older firms? Yes, the authors wrote: “An economy that is saturated with older firms is one that is likely to be less flexible, and potentially less productive and less innovative than an economy with a higher percentage of new and young firms.” Moreover, the pandemic is disproportionately hurting small and mid-size firms, many of which lack the financial capabilities needed to survive. The ensuing wave of business closures will accelerate the rising dominance of large firms across industries.

The BRI authors recommend that the administration strengthen the building blocks of innovation and small business creation through a series of measures, such as improving the performance of publicly funded incubators and accelerators, streamlining the processes for new business formation across federal, state, and local agencies, and boosting investments in underserved communities.

Old ways of governing no longer work. The new administration should leverage digital tools rebuild trust in democratic institutions and restore confidence in the relationship between citizens and their government. Civic leaders and public advocates can use digital technologies to involve a diverse network of citizens in formulating grassroots plans for change in their communities, including centers for digital re-skilling, local development projects, public health initiatives, and voter registration campaigns.

Embrace the digital dollar and other digital currencies

“A convergence of digital technologies is driving the biggest ever transformation of assets from the physical to the digital - blockchain, artificial intelligence, and the Internet of Things,” the report’s authors note. Many in the blockchain industry have developed a variety of digital tokens and cryptoassets to facilitate the use of their systems or to fund their development or operation. In particular, a number of central banks, including China, are planning to launch digital fiat currencies to benefit their economies. “Lawmakers need a sense of urgency around creating a US digital dollar.”

“Across these priorities, the US government’s digital journey will entail transforming business and organizational models, processes, and competencies to create a superior value proposition for citizens, businesses, and other stakeholders of government,” the authors write in conclusion. “Digital transformation, after all, is not just about modernizing technology and tools. It is about adopting appropriate digital technologies to change how we work and deliver public value in the digital economy. … The transformation process is both exhilarating and painful, but the price of inaction is a lost opportunity for the United States to redefine its role in the lives of its people and as a force for good in the world.”