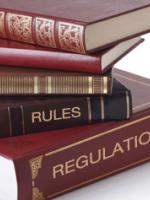 Here’s one example of what the review found:

Since the 1970s, milk has been defined as an “oil” and subject to costly rules designed to prevent oil spills. In response to feedback from the agriculture community and the President’s directive, EPA recently concluded that the rules placed unjustifiable burdens on dairy farmers -- and exempted them. The exemption gives whole new meaning to the phrase “don’t cry over spilled milk.” And over the next decade, the exemption will save the milk and dairy industries, including small business in particular, as much as $1.4 billion.

This was but one of a number of examples Obama’s regulatory oversight chief, Cass Sunstein, mentioned last week when he released the results of preliminary agency review efforts in a speech to an audience at the American Enterprise Institute.  According to a Washington Post story on the speech:  “Oil spill prevention requirements will no longer apply to spilled milk. Gasoline pumps wouldn’t need devices for trapping vapor pollutants, and there would be fewer bureaucratic hurdles for doctors who want to dispense medical advice to a distant patient.”

How Significant Is This?

A recent Wall Street Journal column by two economists calculated the cost of regulations to the US economy in 2008 at $1.7 Trillion a year in a study they did for the Small Business Administration (SBA).  This is more than 10 percent of GDP.  If this estimate is correct, that’s a potential drag on the economy.

But the SBA study did not address the tension between the costs and benefits of regulations.  It also did not address whether the same policy results could be achieved with a different design or approach than that used in the original rules developed, sometimes decades ago in a different environment.  That is what President Obama asked agencies to examine back in February.

Sunstein noted that the goal was not to gut regulations but rather the President said the regulatory system “must measure, and seek to improve, the actual results of regulatory requirements.”

Sunstein supplemented the president’s executive order with two pieces of guidance from the Office of Management and Budget (OMB).  The first provided details on how agencies should conduct their look-back reviews.  The second dealt with what agencies should do after their preliminary reviews were released on May 18, such as posting their results on their agencies’ Open Government web pages (here’s the link to EPA’s as an example).

Agency Plans on the Web

Sunstein said OMB received plans on regulatory reform initiatives underway from over 30 departments and agencies, with some detailing more than 50 initiatives to rethink existing rules.  He announced that “over $1 billion in savings are anticipated from just a few initiatives from the Department of Transportation, the Department of Labor, and EPA. And all in all, the plan’s initiatives will save tens of millions of hours in annual paperwork burdens on individuals, businesses, and state and local governments.”  He also announced a White House Website on Regulatory Reform that serves as a one-stop resource for all agency reform plans as well as other materials.  Interestingly, the agency plans are posted on Slideshare so you can read and comment on them.

What might be interesting is for some real regulatory policy wonks to go back and look at what these same agencies promised in a similar review of regulations in 1995-96 in conjunction with President Clinton’s reinventing government initiatives.  Did the new proposals go beyond the earlier commitments, or do the earlier commitments look new and fresh after 15 years!