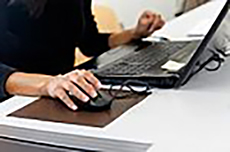 Thursday, June 4, 2020
Katherine Barrett and Richard Greene
Not so long ago, the idea of using telework in the public sector wasn’t gaining much traction.

A significant exception has been in Tennessee, which started aggressive telework policies several years ago. (This, of course, hasn’t included certain jobs, like correctional officers, where it is truly impossible to effectively break up an inmate altercation from a home office).

Still, with the swirling winds of the coronavirus outbreak a part of most people’s day to day lives, states and localities have sent many of their employees home for several months now, in order to avoid spreading the virus among them.

As we’ve interviewed a number of men and women about this topic, one challenge comes up repeatedly: How can a city, county or state have any idea of whether employees are doing their work if  there’s every possibility that they’re spending a bit too much time foraging around in the refrigerator in search of a nice midafternoon snack (that’s what we just did).

The answer is pretty straightforward: Instead of using the fact that someone has shown up on time as one measure of the work they’ve accomplished, states and cities have been spurred by telework to rely almost exclusively on clear-cut employee accomplishments to make sure they’re earning their keep.

Utah, for example, has long been a leader in the use of performance management, which has been proven to help state leaders feel a high degree of security that the state is getting an appropriate level of outcomes from the huge rise in the number of teleworkers in state government.

According to a paper by Viack Corporation, “Before beginning a telework program, managers should clearly define expectations from an employee's performance before he or she begins working remotely. (Governments should) focus on results. . . since it will be difficult to observe activities, behaviors or demonstrated competencies.”

According to the federal government’s Office of Personnel Management (OPM), “quantity, quality, timeliness, and cost-effectiveness are four general measures for supervisors to review.”

But things are a little more complicated than simply knowing the kind of thing to measure.

For example, the actual results anticipated should be clarified at the outset. This is not always the case in the traditional government workplace, where people often get so-called “merit” raises simply by showing up for work every day, clean and sober. This notion, of course, is no more true for telework than it is for people working out of a traditional office. But with the potentially diminished transparency that comes with home work, it’s all the more vital.

Additionally, the measures used should be verifiable. This makes it necessary for employees to be able to actively demonstrate that the results anticipated have been fulfilled. A human resources employee, for example, may be given the task of establishing policies for sexual harassment. It’s not a far reach to ensure that those policies have been created –and disseminated to all the appropriate parties.

Finally, making sure that both employees and supervisors are clear about the measures used is critical. According to OPM, “Communicating progress on meeting those measures and targets should be frequent. Employees need feedback on their performance in order to maintain good performance and to improve overall. In addition, employees need to keep supervisors informed about work progress. Good communication between supervisors and employees is essential for successfully completing work and is especially necessary in a teleworking environment.”

Read the next blog in this series.