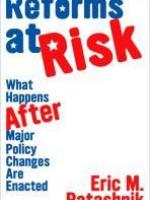 Wednesday, December 2, 2009
John Kamensky
Yesterday, I described how Eggers and O’Leary examined implementation of big government initiatives from a process perspective. Another NAPA conference session highlighted another book, “Reforms at Risk: What Happens After Major Policy Changes are Enact

Yesterday, I described how Eggers and O’Leary examined implementation of big government initiatives from a process perspective. Another NAPA conference session highlighted another book, “Reforms at Risk: What Happens After Major Policy Changes are Enacted,” by University of Virginia professor Eric Patashnik. He too, examines “what happens to sweeping and seemingly successful policy reforms after they are passed.”

However, Patashnik looks at it from the perspective of the politics of reform adoption, not the administrative implementation process. He concludes that “the political struggle does not end when major reforms become enacted.” The key issue he addresses is: “why do certain highly praised policy reforms endure while others are quietly reversed or eroded away?” Based on a series of case studies, he observes that strong administrative capacity during the implementation process isn’t enough.

Like Eggers and O’Leary, he spins his story around engaging case studies. He examines key reforms such as the elimination of agricultural subsidies, airline deregulation, procurement reform, and Medicare’s 1988 Catastrophic Coverage Act (that was repeals 16 months after its passage). In the case of the 1988 Medicare reform bill, the elderly protested that they were being required to pay premiums immediately, for benefits they would receive in the future (long term care). Protests led to the program’s repeal.

Patashnik tries to identify the specific conditions that need to be present for an enacted reform to be sustained. One of his case studies was the procurement reforms of the 1990s. The leader of those reforms, Steve Kelman (who is now a professor at Harvard), agreed with Patashnik’s insights. Patashnik says successful programs, like Social Security, had to develop a strategy for political sustainability in addition to an administrative strategy for effective implementation. He observes that large reforms necessarily lead to “creative destruction” among interest groups and that new political alliances have to be created.

In the case of health care, will the new reforms result in old coalitions or interest groups disappearing (for example, if the bill includes strong tort reform measures, would the tort lawyers’ political action committees fade)? Or will the reforms lead to the formation of new groups that find the reforms as positive? Mapping out these kinds of dynamics should be a Nirvana for political scientists. But Patashnik’s research implies that this should also be part of any strategic implementation strategy that may be developed by the Administration.