Treating the Invisible Wounds of War 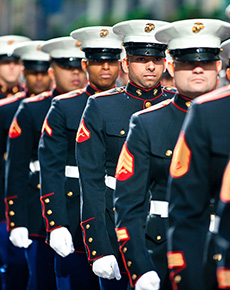 Wednesday, April 19, 2017
John Kamensky
Combat-related concussions, depression, and combat stress are examples of immediate or delayed invisible wounds for military personnel. In WWI, many of psychological symptoms were referred to as “shell shock” or “the thousand-yard stare.” During that time

Today, we are more likely to talk about PTSD (post-traumatic stress disorder) and related mental health issues such as alcohol and substance use as they are recognized medical conditions with effective treatments available. Since September 11, 2001, more than 2.69 million troops have returned from deployments to Iraq or Afghanistan. In a 2012 study, about 40 percent of those who left military service and sought help from the Department of Veterans Affairs (VA) have been diagnosed with mental health, alcohol, and/or substance use disorders, as a result of their service. This has forced a systemic re-think of how to approach the treatment of our Veterans.

Background. The Government Accountability Office (GAO) in 2012 documented a sharp year over year increase in Veterans seeking mental health care from the Department of Veterans Affairs, with about 900,000 seeking care in fiscal year 2006, to about 1.2 million seeking services in 2010.

A decade after the attacks on the World Trade Center and Pentagon, according to the National Alliance on Mental Illness: “roughly 18 to 22 Veterans died from suicide each day. These alarming numbers pressed President Obama to step in and take action” in 2012, issuing an Executive Order detailing specific actions to enhance access to mental health services, to include suicide prevention efforts for Veterans, Service members, and their families.

The Interagency Task Force. The 2012 presidential order led to the creation of the Interagency Task Force on Military and Veterans Mental Health, which is co-chaired by senior leaders from Defense, Veterans Affairs, and Health and Human Services, with a joint program management staff. The task force developed goals and metrics to monitor progress on the implementation of the order. Over the next five years, the role and responsibilities of the task force increased.

In early 2014, the Administration announced a set of 15 cross-agency priority (CAP) goals, one of which focused on reducing barriers to seeking mental health services by service Members, Veterans and their families. The task force’s leadership has become the defacto coordinating and oversight body for this goal.

In late 2014, the scope of the task force grew when it was assigned responsibility to implement a set of 19 specific “Executive Actions,” such as expanding mental health awareness campaigns; and providing opportunities for Service Members, Veterans, and their families to return unwanted medications (oftentimes powerful opioids) for destruction. Progress on these executive actions were tied to the CAP Goal.

In addition, in 2015, the Secretary of VA was assigned the task force the lead for implementing a new law supporting suicide prevention efforts among Veterans (The Clay Hunt Act). And in 2016, the CAP Goal was expanded to include additional activities that addressed emerging priorities, such as same day access to care.

The goal of addressing the mental health needs of Service members, Veterans and their families is, and has been, a focus of public attention and legislative interest and the task force has been an instrumental part of making that happen. The CAP Goal is described in more detail below and includes a focus on reducing barriers to care, increasing access to care, improving patient safety, and expanding research. The Executive Actions target improvements in the transition of care from Defense to VA, and largely reinforce the CAP goals with more specificity.

The Cross-Agency Priority Goal. The Service Members and Veterans Mental Health CAP Goal is a subset of a broader national agenda to prevent suicides and address the mental health needs of Service members, Veterans, and their families. The CAP Goal work is focused on the following work streams:

· Barriers. “Reduce barriers for service members, veterans, and their families to seeking mental health treatment and support.” Examples of specific actions include:

· Access. “Enhance access to and improve the quality of mental health care and support available to service members, veterans, and their families.” Examples of specific actions include:

o Follow through on an agreed-upon National Research Action Plan

o Evaluate the impact of ongoing VA and Defense research to improve diagnosis and treatment.

While some of these initiatives pre-existed the creation of the CAP Goal, participation in the CAP Goal process helped to refine measurable targets, hasten implementation, and provide greater visibility to senior governmental officials about the progress being made.

Governance Structure. This CAP Goal had a high degree of White House attention, with one of the four co-leads being a Deputy Chief of Staff of the White House. This high degree of visibility ensured active engagement by affected agencies, who provided staff support for the Interagency Task Force. There was also support from the National Security Council and the Domestic Policy Council.

The interagency task force has been responsible for establishing policies, benchmarks, and measures of progress. In addition, it provides concrete coordination and program management services such as professional facilitation of meetings.

Examples of Actions Taken. The overall initiative has dozens of specific actions underway and a set of activity metrics such as the number of web hits to the MakeTheConnection web resource (372,732 web hits in fiscal year 2016). Another initiative changes the “In Transition” program, which establishes an explicit handoff between military and VA mental health providers for Veterans with a history of mental health and substance use disorders as they transition from military to civilian life, from an “opt in” to an “opt out” process. As a result, participation in the program increased four-fold.

GAO has assessed progress on specific activities being undertaken, as well. For example, its 2016 review of the VA’s suicide hotline found calls were not being answered in a timely manner, and were rolling over to a backup number. In response, the VA has built a new call center in Atlanta, nearly doubling its capacity. Another GAO report examined wait times for access to mental health evaluations and found internally conflicting policies in VA regarding acceptable wait times. According to the latest CAP progress report, VA has completed implementation of standard operating procedures for same-day initial screenings in 100 percent of all of its facilities.

Next Steps. A November 2016 status report declares many of the task force’s original recommendations have largely been completed, but additional efforts will continue, even beyond the targeted completion date of the CAP goal – which is September 30, 2017. In the report, the task force said in coming years, it “will continue its governance function, with the Co-Chairs shaping the design and execution of the [task force's] recommendations to proactively identify and address emerging issues in American mental health.”

Note: This is the 13th in a series about the progress of the 15 Cross-Agency Priority Goals announced in 2014.