Paul Wormeli is Executive Director Emeritus of the Integrated Justice Information Systems Institute, a non-profit corporation formed to help state and local governments develop ways to share information among the disciplines engaged in homeland security, justice, and public safety. He has had a long career in the field of law enforcement and justice technology.

Paul Wormeli is Executive Director Emeritus of the Integrated Justice Information Systems Institute, a non-profit corporation formed to help state and local governments develop ways to share information among the disciplines engaged in homeland security, justice, and public safety. He has had a long career in the field of law enforcement and justice technology.

Mitigating Risks in the Application of Cloud Computing in Law Enforcement 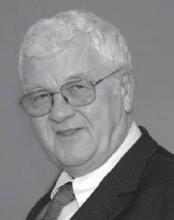 Paul Wormeli is Executive Director Emeritus of the Integrated Justice Information Systems Institute, a non-profit corporation formed to help state and local governments develop ways to share information among the disciplines engaged in homeland security, justice, and public safety. He has had a long career in the field of law enforcement and justice technology. He has been active in the development of software products, has managed system implementation for dozens of agencies throughout the world, and has managed national programs in support of law enforcement and criminal justice agencies.

Mr. Wormeli was the first National Project Director of Project SEARCH, and was subsequently appointed by the President as Deputy Administrator of the Law Enforcement Assistance Administration in the U.S. Department of Justice. Mr. Wormeli helped design the first mobile computing equipment sold in this county to law enforcement agencies. Mr. Wormeli managed the staff work and wrote much of the report for the Information Systems section in the report of the National Commission on Standards and Goals for Criminal Justice, which dealt with criminal justice information system standards. He was the project manager for the development of the first crime analysis handbook published by the National Institute of Justice. He has been an advisor to the White House on security and privacy, participated in the drafting of federal law on this topic, and was responsible for the development of numerous state plans to implement the federal and state laws on information system security and privacy. During his tenure at the Justice Department, he served on the President’s Committee on Drug Enforcement. Mr. Wormeli is an author and lecturer on law enforcement and justice technology.

Mr. Wormeli was also the first Chairman of the Integrated Justice Information Systems Industry Working Group (IWG), a consortium of over 100 companies which was formed in 1999 at the request of the U.S. Department of Justice to help facilitate the implementation of integrated justice information systems throughout the nation. After the IJIS Institute was created as a non-profit follow-on to the IWG, he became the first fulltime executive director of the IJIS Institute and served in this capacity until January, 2011, while the membership grew to nearly 200 companies. In this capacity, he was the first Chairman of the NIEM Communications and Outreach Committee and was the first Chairman of the Executive Steering Committee of the Justice Training and Technical Assistance Committee, a consortium of service providers created by the U.S. Department of Justice to help to facilitate the implementation of new ways to share information. He has served on the technical advisory committee for the Harvard School of Government Innovator’s Network program for law enforcement and justice, and on the NASCIO Information System Architecture Working Group. He is an associate member of IACP, the Police Executive Research Forum, and a corporate member of the Association of Public Safety Communications Officers.

In 2009, Mr. Wormeli was appointed to a three-year term on the Committee on Law and Justice (CLAJ) of the National Academy of Sciences. The CLAJ, established in 1975, was created to provide a more scientific understanding of issues pertaining to crime and justice, and its activities today include identifying new areas of research and participating in resolving scientific controversies.

In 2011, Mr. Wormeli was named by Government Technology magazine as one of the Top 25 Doers, Dreamers & Drivers in Public Sector Innovation in the U.S., one of “an eclectic group of individuals … who share a willingness to challenge convention and find new answers to longstanding issues.”

At the 2011 Annual Conference of National Association for Justice Information Systems (NAJIS) Wormeli was presented the Kelly Bacon award for “Outstanding Service to the Justice Information Technology Community.” The award, which is made periodically but not every year, recognizes individuals who, like Bacon (NAJIS’s first president), have made long, sustained contributions to NAJIS and its mission to foster overall improvement of justice information
systems nationwide.

Mr. Wormeli has been a founder of three companies in the law enforcement information systems field, providing computer-aided dispatch and police records management software applications to law enforcement agencies. Software developed and implemented by his companies has been used by hundreds of agencies throughout the U.S. and Australia.

Mr. Wormeli writes a blog called “The IJIS Factor” at http://www.ijis.org/EDblog/ which has been named by FedTech as one of the 50 “Must Read” blogs on federal information technology. He is a co-author of CIO Leadership for Public Safety Communications: Emerging Trends and Practices, Alan Shark, Ed., published by Public Technology Institute, August, 2012.

Mr. Wormeli holds a Bachelor of Science degree in Electronics Engineering from the University of New Mexico, and a Master of Engineering Administration degree from the George Washington University. He undertook courses in the honors program for industry as a part of the doctoral program in Engineering Economic Systems at Stanford University. He received a certificate in Cross-Boundary Transformation from the John F. Kennedy School of Government
Executive Education program at Harvard University.