Cheryl L. Mason was nominated by President Donald J. Trump to serve as the 4th Chairman of the Board of Veterans’ Appeals and was confirmed by the United States Senate on November 8, 2017.

Cheryl Mason, Chairman of the Board of Veterans’ Appeals within the U.S. Department of Veterans Affairs 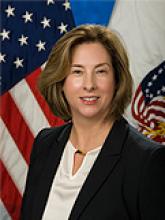 Cheryl L. Mason was nominated by President Donald J. Trump to serve as the 4th Chairman of the Board of Veterans’ Appeals and was confirmed by the United States Senate on November 8, 2017.

As Chairman of the Board of Veterans’ Appeals (Board), she leads a team of approximately 1050 personnel including Veterans Law Judges, attorneys and administrative professionals to meet the Board’s mission of conducting hearings and deciding appeals for Veterans and their families. Ms. Mason is accountable for the efficient and effective management of Board resources and executing a budget in excess of $170 million. The Board is the final administrative tribunal statutorily charged with deciding appeals arising from Veterans’ claims from all three administrations: Veterans Benefits Administration, Veterans Health Administration, and National Cemetery Administration.

Prior to assuming her current role, Ms. Mason served as Interim Principal Deputy Vice Chairman, where she was responsible for legislation, regulation and policy which included working with stakeholders and Congress to gain passage of the Veterans Appeals Improvement and Modernization Act of 2017. In this position, Ms. Mason was also responsible for knowledge management, quality assurance and review, FOIA, and records management. Ms. Mason also served as Deputy Vice Chair, Chief Veterans Law Judge, Veterans Law Judge, and Counsel at the Board as well as an attorney with the Federal Labor Relations Authority and as a Department of the Air Force civilian at HQ United States Air Forces in Europe at Ramstein Air Base, Germany. Ms. Mason also served as a military services paralegal coordinator for Europe, and an instructor at Central Texas College, Kapaun Air Station, Germany. Ms. Mason is the spouse of an Air Force veteran, married to Lieutenant Colonel, USAF (retired), and is the daughter of a World War II Navy Veteran.

Originally from Portsmouth, Ohio, Ms. Mason received her B.A. with Distinction in Political Science and Psychology from Ohio Northern University and her J.D. from Creighton University School of Law. Ms. Mason began her legal career in private practice in Omaha, Nebraska.