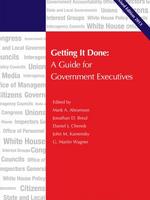 Tuesday, February 26, 2013
Dan Chenok
As Federal executives look forward for the second term of the Obama Administration, the Center has renewed our look at factors that can help them achieve success. Use the links below to order or download chapters of the book.

Four years ago, the IBM Center for The Business of Government released a book to guide new government executives, especially new political appointees. The goal of the book was to quickly acclimate new government executives to the world of public service as practiced in Washington, D.C. The book, entitled Getting It Done: A Guide for Government Executives, contained a series of short strategic discussions about "the dos and don’ts" of Washington and presented useful insights about working with key stakeholders and constituencies.

Historically, second terms for a presidency have seen significant activity in improving government. The Clinton administration’s National Partnership for Reinventing Government and the Bush administration’s President’s Management Agenda both saw renewed focus in the four years following reelection. The opportunity for new leaders in the Obama administration to make a difference is great.

Part I of the book offers a straightforward to-do list to guide officials in their new leadership positions. Tip includes how to act quickly on what can't wait, develop a vision and a focused agenda, and much more. Part II of the book provides short overviews of the fourteen stakeholders that government officials will most frequently encounter. These stakeholders include policy councils, Congress, unions, and the Government Accountability Office.

We hope that this update to Getting It Done will prove useful in helping them to achieve success.