How federal agencies embrace flexibility and bring visibility to the cloud

We are pleased to announce our latest round of new reports on key public sector challenges, which respond to priorities identified in the Center's research agenda. Our content is intended to stimulate and accelerate the production of practical research that benefits public sector leaders and managers.

How an Agile Government Can Improve Operations, Service, and Public Trust

Government leaders increasingly find that “unexpected events” are now neither rare nor unexpected. Indeed, they are shocks—more frequent and more destabilizing, and involving cybersecurity, climate, supply chain, human capital, and other domains.

Governments around the world are advancing in the transformation of operations and services for the digital age. The goal of “trusted digital services” enables transformation in a way that earns public trust. Developing and implementing trusted digital services matters supports near-term service delivery, and long-term legitimacy and sustainability of government with the public. Advanced digital governments cite trust as a key success factor, and as well as how digital technologies supportive innovative governance that services the public.

How Government Can Use Data to Improve Equity in Housing Programs

Housing is a cornerstone of wealth creation in the United States. Homeownership provides the ability to build wealth by acting as a forced savings mechanism through home value appreciation. Yet over the past 60 years, obstacles to homeownership have limited the ability of Black Americans and other communities of color to create wealth, and have had negative impacts on health and well-being, as well as inequalities in education, job opportunities, political power, access to credit, access to health care, and more.

How Can Government Promote Greater Homeownership Across Communities of Color?

Our collaboration with recognized scholars and thought leaders is intended to spark the imagination—crafting new ways to think about government by identifying trends, new ideas, and best practices in public management and innovation.

Based on our recent research and perspectives shared by current and former government, academic, and nonprofit leaders, this special report identifies eight strategies for transforming government in the years to come. These strategies draw on significant insights from a research roundtable in 2020.

In my previous post, I discussed “agile policymaking” as a vehicle for better government and how agile would be more objective and evidenced-based when it comes to traditional policy analysis (“TPA”).

Just the sound of “making government more agile” summons pleasing images to the civic mind: resilient response to changing conditions; innovation and ingenuity; immediacy in problem-solving; citizen-centered service; bureaucracy getting out of the way; experimentation leading to progress. 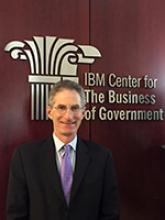 Mr. Chenok serves in numerous industry leadership positions. He is a CIO SAGE and member of the Research Advisory Council with the Partnership for Public Service, Fellow of the National Academy of Public Administration, Member of the Board of Directors for the Senior Executives Association, Member of the Government Accountability Office Polaris Advisory Council for Science and Technology, Member of the American University IT Executive Council, and Mentor with the Global Policy, Diplomacy, and Sustainability Fellowship.  Previously, he served as Chair of the Industry Advisory Council (IAC) for the government-led American Council for Technology (ACT), Chair of the Cyber Subcommittee of the DHS Data Privacy and Integrity Advisory Committee, Chair of the NIST-sponsored Federal Information Security and Privacy Advisory Board, and two-time Cybersecurity commission member with the Center for Strategic and International Studies. Mr. Chenok also generally advises public sector leaders on a wide range of management issues. Finally, Mr. Chenok serves as an Adjunct Associate Professor with the LBJ School of Public Affairs at the University of Texas in Austin, teaching at the school's Washington, DC Center.