Follow the Technology Money: Priorities from the 2012 IT Budget Proposal (and Beyond) 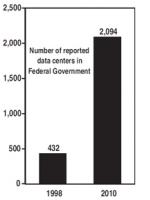 Tuesday, March 8, 2011
Dan Chenok
The Obama Administration’s FY 2012 Budget lays a clear path forward for priorities that will garner resources over the next two years. OMB is also pointing the way forward past that, asking whether government can find a way to leverage more commercial ass

As occurs each year, the President’s Budget Proposal includes a Chapter on IT spending – it’s in the “Analytical Perspectives” document, Chapter 20.  This chapter highlights key current and forthcoming priorities, and represents the IT spending report required under the Clinger Cohen Act.

The IT Chapter marks major areas of emphasis that agencies, contractors, and citizens should look to in aligning their activities to resources in the coming year.  Interestingly, because it is both a report on current spending and a budget plan, it is one of the areas in the Budget that points to immediate actions being taken by OMB, under the leadership of Director Jacob Lew and Federal CIO Vivek Kundra.  As such, it helps put a context around the recent 25-point IT Reform Plan that is guiding this year’s activities for OMB and CIOs.    Major focus areas include:

More recently, Federal CIO Kundra appeared at a panel (with DHS CIO Richard Spires and VA CIO Roger Baker) and asked a simple question:  if Federal employees can use cars from a rental company or stay in hotels operated by commercial providers, could a similar set of rules apply to the secure use of commercial IT assets?  In a world where mobility reigns supreme and cloud -- and broadband -- allows connection to large amounts of data and computing power from virtually anywhere (pun intended), this could bring a paradigm shift to how the government acquires and uses technology assets.

Clearly there are many questions that must be addressed for this to become a reality, especially with regard to security and privacy when sensitive government data are accessible through public networks.  But the world is moving in this direction, and it is to OMB’s credit that the conversation has started.