How Can Government Promote Greater Homeownership Across Communities of Color? 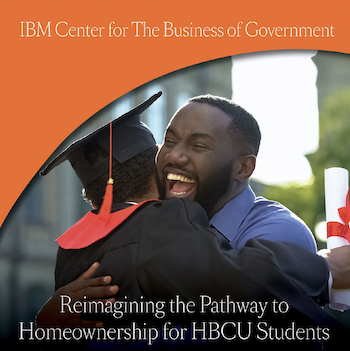 Wednesday, November 2, 2022
Dan Chenok
A recent roundtable of leaders from the Department of Housing and Urban Development, Ginnie Mae, Fannie Mae, the Department of Education, and key non-profit and industry stakeholders developed recommendations for actions to support homeownership among HBCU students and families.

Homeownership remains key to the preservation of generational financial stability and wealth building. Understanding the value of strengthening this landscape, the IBM Center for the Business of Government recently hosted a roundtable event with a specific focus on increasing homeownership opportunities for HBCU students and alumni - (learn more about the Administrative initiatives the event supported: Executive Order 14041, 14050, and 14058). These conversations better informed all actors on how they might leverage government pathways to reform.

Despite efforts since the Fair Housing Act of 1968, the path toward homeownership continues to represent a mounting systemic challenge for many minority groups, particularly Black individuals. In fact, the homeownership gap is even larger now than it was at its time of passage. Finding solutions to increase homeownership levels within the Black community is an integral part of efforts to close the racial wealth gap in the United States. Recent executive orders dedicated to advancing economic opportunity through HBCUs have elevated the need for conversations about how government and non-government agencies can contribute to the accumulation and preservation of wealth for Black Americans.

The need for long-term solutions is a driving factor in the efforts put forward by multiple non-profit and civic organizations. The impact of owning a home creates wealth-building potential for multiple generations of beneficiaries. Alternatives to traditional lending have proven to be a pivotal resource for individuals who would otherwise be denied or pressured into predatory loans – for example, a service delivery model that considers an individual’s circumstances and embraces character-based lending. Continuous identification of how discriminatory lending practices have contributed to an unlevel playing field can better help agencies implement policies that promote a more equitable homeownership landscape.

Key Action Points from the Roundtable

During the discussion, senior leaders from the U.S. Department of Housing and Urban Development (HUD) offered meaningful government insight into how lenders, federal agencies, and non-profit organizations can work together toward the same priorities. HUD executives also addressed efforts to focus on building a diverse population of homebuyers by collaborating with local elected officials and holding them accountable in favor of laws and regulations that empower individuals across the board.

Discussion among government, nonprofit, and industry leaders highlighted the necessity for creativity in striving to eliminate the racial wealth gap. Recognizing the need for long-term solutions within a better service delivery model is crucial in promoting change. A senior nonprofit executive cited the aftermath of Hurricane Katrina as an example of how pivotal homeownership can be throughout financial recovery after a natural disaster; destruction of resources in these events can have extensive implications for generations to come.

All participants agreed with the need to lay the foundation of financial security by bringing homeownership directly to communities of color, both directly and through social networks. Community and family strength is a central part of the homeownership equation, and participants learned from examples of students who buy homes and then reach out to their parents’ generation to encourage them to do the same.

A significant emergent theme throughout the roundtable discussion was the importance of timing when preparing for home buying. There is no such thing as “too soon” when it comes to receiving accurate and relevant homebuying advice. In addition to the timeliness of education on the matter, the following key takeaways were developed throughout the discussion:

In conclusion, to maintain progress toward fair housing, agencies should leverage recent executive orders [cite] and reimagine efforts to empower homebuyers. Part of the equation toward increased homeownership in the Black community ought to focus on increased education about strategic financial decisions, making HBCUs key players. The historical context of homeownership as a line of wealth-building demarcation is vital in understanding the value of pivotal small changes.