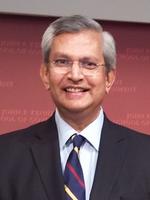 Governments around the world face similar challenges, including how to raise program performance given constrained budgets, how to manage the development of policies and regulations for maximum benefit, and how to harness innovation to improve operations and serve citizens.  As governments have begun to explore sharing best practices for addressing these and similar challenges, the IBM Center for The Business of Government has increasingly worked with global leaders who are interested in research and actionable recommendations to raise public sector effectiveness.

Consistent with this expanded international reach, the Center has also sought to partner with experts who bring perspectives that transcend national borders.  Accordingly, we are very pleased to announce that Prajapati Trivedi -- formerly Secretary to the Government of India for performance and results, and currently a Professor at the Indian School of Business and the Harvard Kennedy School of Government, is affiliating with the Center as a Visiting Fellow.   Prof. Trivedi will focus on a range of global management issues, including performance management and regulation.  His ideas will appear regularly in the Center’s blog, and he will lead related programming to support governments as they address key challenges.  He will also enhance the Center’s capacity to deliver content that informs public sector leaders in his home country and around the world.

Prof. Trivedi is a Senior Fellow (Governance) and an Adjunct Professor of Public Policy at the Indian School of Business (ISB), where he is directing a project on ‘Regulating the Regulators’ and is the Faculty Chair for the Management Programme in Public Policy (MPPP). In addition, he is a Visiting Economics Faculty at the Harvard Kennedy School of Government.

Prior to joining ISB, from 2009-2014, he worked as a Secretary to the Government of India in the Cabinet Secretariat, where he was responsible for designing a highly regarded whole-of-government performance monitoring and evaluation system for government departments and reporting the results to the Prime Minister of India.

He worked as a Senior Economist with the World Bank from 1995-2009; as an Economic Adviser to the Government of India (1992-1994) and a Chaired Professor of Public Sector Management at the Indian Institute of Management Calcutta (1987-1992). He received his M.Sc. (Economics) from the London School of Economics in 1972 and his Ph. D. (Economics) from Boston University in 1985. He is also the author of four books and several academic papers, he has worked as an advisor in 27 countries around the world.

We welcome Prof. Trivedi to the Center, and look forward to sharing his insights with government leaders and stakeholders in the US and around the world.