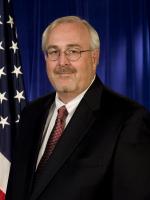 Wednesday, February 17, 2010
Michael J. Keegan
A Conversation with W. Craig Fugate, FEMA Administrator In the last decade, whether as a result of natural or manmade disasters the nation’s emergency response apparatus has faced enormous challenges. Overcoming these challenges and forging a national...

In the last decade, whether as a result of natural or manmade disasters the nation’s emergency response apparatus has faced enormous challenges. Overcoming these challenges and forging a national emergency response network for the 21st Century requires innovation and teamwork.

Recently on The Business of Government Hour, I had the opportunity to speak with Craig Fugate, Administrator of the Federal Emergency Management Agency (FEMA) about his efforts in this area. In this interview, Administrator Fugate discusses such issues as the challenges facing his agency, the national emergency response network, how FEMA is leveraging social media/ web 2.0 technologies, the importance of individual preparedness, and how technology can assist FEMA and its partners respond more effectively to disasters.

“The federal government had been responding to disasters caused by natural hazards, and since the 1800s", says Fugate. The Congressional Act of 1803 was the earliest effort to provide disaster relief on a federal level after a fire devastated a New Hampshire town. From that point forward, assorted legislation provided disaster support. In 1979, the Federal Emergency Management Agency (FEMA) was established by an executive order, which merged many of the separate disaster-related responsibilities into a single agency. Since then, FEMA has dedicated itself to the mission of helping communities nationwide prepare for, respond to and recover from natural and manmade disasters – a mission strengthened when the agency became part of the Department of Homeland Security (DHS) in 2003. FEMA leads and supports the nation in a risk-based, comprehensive emergency management system of preparedness, protection, response, recovery and mitigation. As of November 2007, FEMA has responded to more than 2,700 presidentially declared disasters. According to Fugate, FEMA is divided into 10 geographical regions composed of regional offices and a regional administrator and staff in those regions. He noted that among that staff: FEMA has a little over 4,000 career service staff with temporary hires (or what FEMA calls its disaster reserve) right now between 3,000 and 4,000 people. This number may go up or down depending upon how many more recent disasters are declared.

FEMA’s role during disasters is spelled out in the Stafford Act, and recently expanded in the post Katrina Emergency Reform Act. Though there seems to be some widespread public misconception as to its actual duties during a disaster. Administrator Fugate provides an overview of the legislative authority that defines what it can do and outlines the proper role of FEMA in response to a natural and/or man-made disaster.

With its ever evolving mission, FEMA faces tremendous challenges. Fugate identifies a host of challenges facing his agency and the national emergency response network.

Fugate takes issue with a government-centric approach to disaster response. Government is just one partner in the critical teamwork approach that should define emergency and disaster response for the 21st century. He underscores the importance of personal preparedness in advance of disasters.

Craig Fugate on: Fostering a culture of personal disaster preparedness with Ready.gov