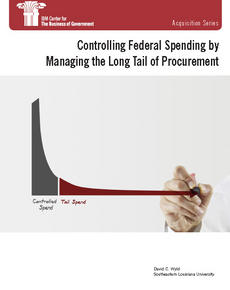 In this report, Professor Wyld provides the first quantitative anal­ysis of tail spend in the federal government.  The report introduces the concept of tail spend to government executives:  in short, tail spend is procurement outlays that are outside of an organization’s core spending and core supplier groups, cov­ering many miscellaneous expenditure categories that are not managed as part of an organization’s core operations.

This report’s publication is timely, as the federal government continues to seek innovative ways to reduce costs in an era of sequestration and tight budgets. Professor Wyld argues that more aggressively managing the tail of government spending— smaller, non-core expenditures that tend to receive less atten­tion—offers the possibility of substantial cost savings. Based on his analysis of government-reported spending in the Federal Procurement Data System (FPDS), Professor Wyld reports that it is possible for the federal government to see significant savings by more aggressive management of tail spend.

In addition to his path-breaking analysis of tail spend in govern­ment, Professor Wyld sets forth a model that can used in manag­ing tail spend. Specifically, he recommends increased tail spend awareness followed by spend analysis, spend sorting and clarify­ing, and spend implementation. In addition, the report describes seven specific ways to improve tail spend managing, including identifying maverick, fragmented, and misclassified spending.

This report continues the IBM Center’s interest in cost savings. Our report, Strategies to Cut Costs and Improve Performance, argues that the federal government can reduce spending by adopting commercial best practices in government. Managing the long tail of procurement is clearly one best practice that can now be adopted by government.

We hope that this timely report will be useful to government executives, both those inside and outside the world of govern­ment procurement, as they seek to find new ways to reduce government spending.