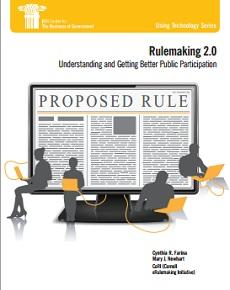 Monday, July 29, 2013
Dan Chenok
Government organizations can increase both the quantity and quality of public participation from missing stakeholders, unaffiliated experts, and the general public.

The IBM Center for The Business of Government is today releasing a new report, Rulemaking 2.0: Understanding and Getting Better Public Participation, by Cynthia R.Farina and Mary J.Newhart with CeRI (the Cornell eRulemaking Initiative).

This report provides important insights in how governments can improve the rulemaking process by taking full advantage of Rulemaking 2.0 technology, building on the progress made by the U.S. Government’s longstanding Regulations.Gov initiative.  The report’s findings and recom­mendations are based on five experiments with Rulemaking 2.0 conducted by CeRI researchers, four in partnership with the Department of Transportation and one with the Consumer Financial Protection Bureau.