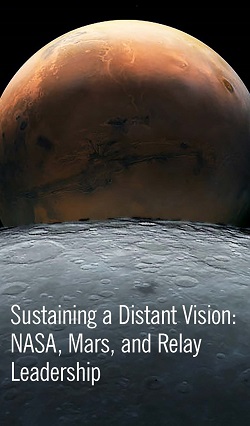 Thursday, November 4, 2021
Michael J. Keegan
Relay leadership is critical. The leaders of NASA have to share the same long-term goal and work toward its end.

With the release of Sustaining a Distant Vision: NASA, Mars, and Relay Leadership, Professor W. Henry Lambright of the Maxwell School at Syracuse University continues his research for the IBM Center exploring the intersection of government leadership, Big Science, and space exploration.  The report draws on insights from a group of experts in leadership roles with NASA.

Lambright describes a meeting in October 2020 amongst 3 past NASA administrators that underscored a clear consensus had evolved since 2004 of ceding low-Earth orbit to commercial space and moving beyond the International Space Station. But the nation had problems in turning desire into policy. Still, there have been earlier calls for going back to the Moon and on to Mars and these had gone nowhere. Would the situation be different in the 2020s? For the first time, there seemed to be policy commitment across presidents and parties to a direction if not particular deadline. Issues had to do with turning desire into supportive programs. According to Lambright, there is widespread belief that a Moon landing in the late 2020s and a jour­ney to Mars in the latter 2030s are technically possible. Holding to the long-term goal of Mars, however, requires interim goals, and these are sub­ject to change as the decade moves on. Charting a path to Mars entails leadership in com­plex environment whose political and organizational challenges are as daunting as those that are technical.

Lambright acknowledges that human space exploration policy to Mars with the Moon as a steppingstone, constitutes a trajectory for NASA with a relative consensus of support. It has evolved over several years as the goals were distant, especially Mars. There are stages in how policy develops. What sets long-term policy apart from other policy processes is, obviously, the length of some of the stages, especially implementation. Sustainment over decades is a challenge, given short-term disruptions and political change. Periodic renewals, often requiring strategic adaptations, are a requirement.

In his narrative, Lambright invites you to consider the following stages as an abstract but helpful roadmap. First is agenda-setting. For some years after the Apollo Moon landings ended in 1972, going back to the Moon and on to Mars has been on NASA’s agenda. What moves a particular aspiration higher on the agenda are triggers. Policy analysts call these disruptive events “punctuation” points that disrupt the status quo. A second stage of policy formulation unfolds. Efforts are made to find a response to the disruption.  When authoritative officials in national government legitimate a partic­ular policy option, that process of adoption constitutes a third stage. Fourth comes early implementation. The agency organizes, staffs, bud­gets, and begins execution. In due time, a fifth stage of evaluation/pos­sible reorientation takes place. Sixth, there is later implementation to closure, or what many call institutionalization. The new mission reaches its goal. What was new becomes routine. For long-term programs, sustainment without significant modifi­cation is extremely rare. But adaptation is the price of renewal.

Lambright identifies three factors that stand out. First, continued administrative leadership. Long-term programs require “relay leadership.” An implementing agency has the greatest stake in a mis­sion, and as its leaders change, long-term programs require successors to take up the cause, possibly altering its rationale as times change. One administrator can take a hands-off approach to a program, while another moves it forward towards its goal. Leaders vary in experience, contacts, and political skill in dealing with shifting environments. Second is an essential strategy of coalition building. The agency requires administrative partners and political supporters. Third is the ability of leaders and allies to neutralize threats to the program. These three fac­tors—leadership, coalition-building, and neutralization of threats— interact and determine the successful sustainment of the program. They adapt to new pressures, while holding to a goal. Mars is, as Bolden said, closer than it was before 2004, but it is still far away in space and time. The Moon is closer, with relative consen­sus for it as an interim goal. NASA is in an early implementation stage, at least where the Moon is concerned. It has gotten through two presidential changes since 2004 and is adjusting to the latest transi­tion now.

How has the agency gotten to the present point? What have adminis­trative leaders done? What are the likely possibilities and requirements for sustaining and even speeding this long-term policy process and reaching Mars in the future? In his new report, Harry Lambright explores these questions and offers a imely perspective on why such a vision can shape 21st space exploration. This contribution joins a compendium of diverse reports by Lambright for the IBM Center exploring the intersection of leadership, space exploration, and big science.  Here's a sampling:of those reports: