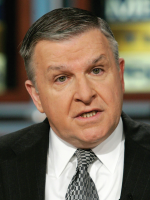 I think we have to understand how much the world has changed in the last two decades, beginning with the fall of the Soviet Union. It’s much more interdependent because of globalization, the rise of information technology, and the migration of peoples. There have been power shifts. I think we’ve learned today that military power no longer has the clout it maybe once did. Right now, I think, economic power, social influence, political influence are dimensions of power that may be greater, or at least as great, as the projection of force around the world. We as a nation, the United States, have to learn how to use those other aspects of our power and how to integrate all the elements of power more effectively. I think we have a long way to go. I was impressed with the national security strategy that came out last May, because it identified the foundation of our national security as education, the economy, and our energy dependence and also as areas we had to work on. What was impressive about it was an acknowledgment that it isn’t just projection of influence or power in a military sense. It called for looking internally at the foundations of our own system. I think, in that respect, it’s been a major change.

Leadership Crisis For my last book, I researched what people thought about leadership. I was shocked to find that somewhere around 75 to 80 percent of the American people think we have a crisis in leadership across the board in every element of our society. However, this crisis in leadership is not just in the U.S., but globally. I think the conditions of the 21st century may have led to this crisis, as it’s a much more complex and complicated world.

To be competent, you truly have to master a broad field of capabilities. Our leaders are under much greater scrutiny than they have ever been before. Their world has been expanded and a spotlight thrown on it. In many ways this is a good thing, but it also makes it difficult in terms of how leaders have to act.

I think the demands from those we lead are greater today. This is represented by the stresses, changes, and degree to which you have to be far more competent, in so many different areas. It is about the speed that you have to operate in today. It requires quick decisions and mastering information technology; it has made the world much smaller, tighter, and well informed. These changes all have impacted on leadership and I think the old ways of leading won’t be effective in this modern world.

Characteristics of a Successful Leader

Successful leaders understand the people they lead. They listen well. They’re approachable and value diversity. They understand that this diversity is more than what you might think of at first; ethnic, racial, or gender diversity. It also comes from other attributes such as a longer-lived workforce. We have many more generations in the workforce than we have had before. They understand themselves better and are much more self aware. They seek improvement. They seek coaching and mentoring. The successful leaders don’t assume they “get it.” They are constantly learning. They are critical thinkers, systems thinkers, and creative thinkers. Successful leaders today make decisions based on analysis.  They recognize patterns. These leaders become more instinctive based on their ability to analyze their experiences and educate themselves. They have a tremendous set of values. They understand the importance of ethics and moral behavior given the scrutiny they are under.

I think value-based institutions and leadership now are more successful. [Leaders] are strategic thinkers. They are visionaries. They look out beyond just the immediate future, the next quarter in business, or the next year or two. They have a place they want to reach in a decade or two. They work the organization to achieve that vision. They’re willing to take risks. They’ll change organizations. They’ll adapt quicker. They know that type of organization won’t work. It’s too ponderous, it’s too slow. It isn’t effective and it’s hard to change. They appreciate technology, especially information technology. They understand the environment they’re in at present. They aren’t what business calls tall, thin people. They don’t just work in one narrow area. They constantly expand their field of knowledge, their basis for information, their understanding of the world as they become more senior and move up. They are effective communicators, both internally and externally. They can articulate who they are, what they are, and what they want. These successful leaders work well in crisis and react better in the face of change.

Decision-Making as the Soul of Leadership

The term analysis means breaking down. You have to look at an issue, a problem, and break it down in its parts to understand it. You, then, have to synthesize or rebuild it in a way that’s usable to you. You have this type of an approach in order to understand your options. In this, analytical thinking—that ability to look and understand given your experiences, education, and knowledge and piece together the right path—is key.

Not since the 1947 National Security Act have we had a major restructuring of our government to look at the world today and face its challenges better prepared, better organized, and more intelligently resourced. We need that again and it needs to be bipartisan. This new world requires a different approach, but we’re still following legacy strategies from the Cold War and even World War II. We have old organizations that aren’t responsive and don’t appreciate changes in the world such as globalization, the rise of information technology, and all the other things that have changed the world into what it is today.

Listen and download to my conversation with General Tony Zinni, USMC Ret. on The Business of Government Hour.

Read and download the complete Perspectives on the Future of Power, Security, and Leadership with General Anthony Zinni, (USMC Ret.)