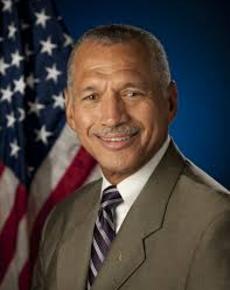 Wednesday, June 18, 2014
Michael J. Keegan
"Our vision essentially says we reach for new heights to reveal the unknown so that what we do and learn makes life better for humanity," notes, NASA Administrator Charlie Bolden. He joined me on The Business of Government Hour to explain this vision and

We stand at a pivotal moment in space exploration. There are plans to further extend our reach into the solar system, and NASA is leading the way.  An orbiting outpost, the International Space Station (ISS), is home to a crew of astronauts from across the world conducting research and learning how to live and work in space.

There are robotic explorers probing vast regions of the solar system, including the depths of interstellar space. NASA is also preparing for a challenging mission to capture and redirect an asteroid for human exploration—a stepping stone to future human exploration of Mars.

While NASA and its international partners strive to achieve these exploration goals, we are also witnessing the birth of a new commercial space industry.

Charlie (Charles F.) Bolden, NASA Administrator joined me on The Business of Government Hour to explore these questions and much more. The following is an edited excerpt of our discussion.

Like many federal agencies, NASA recently released it latest strategic plan for the next four years. Would you elaborate on your strategic vision for the agency and briefly describe the strategic goals that guide our major initiatives?

We highlight three core goals in our 2014-2018 NASA Strategic Plan:

Our vision essentially says we reach for new heights to reveal the unknown so that what we do and learn makes life better for humanity.

Charlie, what are some of the challenges you face in your current role and how have you sought to address them?

We are a people organization, so my number one challenge is to take care of my people.

We're now using the space station to do testing to make sure we understand the challenges associated with long-term space flight on humans. We are trying to develop more robust environmental control and life support systems. When you're on the way to Mars, it’s an eight month trip one way. You have no supply ship that will catch up with you and bring spare parts so you should have a system that's robust enough that it won't break and you won't need spare parts. We're doing all that on the international space station today.

The administration has made it a goal sending humans to Mars by the 2030s. What are the benefits of exploring Mars, and how realistic of a goal is it for Americans to go there within the next few decades?

We're 16 years away from putting humans on Mars. The first few missions won't be landing someone on Mars, but eventually as the president told us in his lifetime he wants to land humans on Mars. There are a number of purposes for going. One is to understand our own planet better. Second is to see if in fact Mars, as many of us suspect, sustains life today and if not, can it sustain life and if so, did it ever sustain life? Those are three separate questions but interrelated to each other. If we find all three are true; it once had life, it can sustain life, and it has it right now then that says that is an alternative habitat for humanity.

When we now talk about going to Mars and going to deep space, we're no longer talking about exploring. We're talking about pioneering setting up habitats where humans can live for long periods of time.  Much of this research is happening on the international space station. Perhaps the initial habitats on Mars may not even be on the surface. It depends on just how harsh the radiation environment is and how much we can protect crews. We may send robotic precursors up to build subterranean habitats.

The most important thing right now is an American capability to get our crews to space and that's the critical reason that we have a full court press on the heavy lift launch vehicle Orion.

While we are on the topic of deep space exploration, NASA has developed plans to “lasso” an asteroid and pull it closer to Earth so that humans can examine it. What can we learn from exploring asteroids?

The way we're going to get the asteroid has not been definitively determined yet, but sort of lassoing, catching it in a capture device is one method. An alternative method is to go to a big asteroid, one that we don't want to change its trajectory passing by earth but we would like to take a giant bolder off of it and take that and put it into a retrograde stable orbit of the moon.

I’d like to explore NASA's space technology program. Would you tell us more about your key priorities in this area and the benefits derived from the program? What challenges do you encounter here?

We are really trying to capture a way to close the technological gap between where we are and where we want to be. The ultimate goal of NASA for this nation is to put humans on Mars and human exploration. We aren't ready to get there yet. We don't have everything we need to get there. There are significant technological medical challenges related to getting us there while ensuring we protect our crew from radiation.

Given your experience, what are the characteristics of an effective leader?

I have my own leadership philosophy and my number one assessment, my number one metric for success is if I walk away, if I go away for some extended period of time will anyone know I'm gone, and if nobody knows I'm gone I think I've done a pretty good job of leadership because I've built a team that knows what's expected. They know what to do.

I invite to listen or download the complete version of my interview with NASA Administrator Charlie Bolden and read the Center's NASA research and articles: