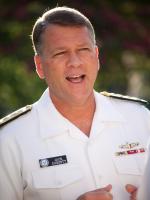 Wednesday, December 22, 2010
Michael J. Keegan
In an increasingly interconnected and networked world, information possesses such significant power that it can no longer be viewed simply as an enabler to meeting one’s mission. The U.S. Navy has recognized the challenges posed in the information age and

In an increasingly interconnected and networked world, information possesses such significant power that it can no longer be viewed simply as an enabler to meeting one’s mission. Whether in business or defending the nation, information can act as a serious differentiator for those who leverage it and use it to their competitive advantage. The U.S. Navy has recognized the challenges posed in the information age and has sought to evolve its warfighting capabilities

to reflect this changing landscape.

Under the leadership of Admiral Gary Roughead, chief of naval operations (CNO), the U.S. Navy has elevated the role of information, making its dominance a main battery in a 21st century arsenal. For this transformation to be successful, the U.S. Navy realigned its organization, consolidating the Director of Naval Intelligence (N2), the Deputy Chief of Naval Operation for Communications Networks (N6), and other information capabilities into a single organization known today as the Office of Deputy Chief of Naval Operations for Information Dominance (N2/N6), led by Vice Admiral (VADM) Jack Dorsett. “My strategic objective,” explains VADM Dorsett, “is to pioneer, field, and employ game-changing information capabilities that give information dominance over potential adversaries and decision superiority for U.S. commanders and operating forces.” He is the CNO’s principle advisor for all information capabilities. According to VADM Dorsett, it is about integrating intelligence with operations—using networks to provide the right information to the right person, at the right time, in the right way, to quickly identify, counter, and defeat threats and dominate adversaries.

Valley Campaign in 1862, Stonewall Jackson did a fantastic job of knowing the territory,” explains VADM Dorsett. “He knew the geography. He had a network of spies that kept track of the Union forces. In essence, he had information dominance over the Union forces,” Dorsett declares. The shifting complexion of warfare reflects the features of its age. “We’re basically taking that simple concept and moving it into the information age. In pre-information age days, we’ve had platforms that were not networked that only collected information for the sake of that particular platform. In this era you can’t afford to do [that]. Information that comes from one platform on one side of the globe may be critical to a national decision back in Washington, DC,” states Dorsett.

“We believe that every platform must become a sensor,” declares VADM Dorsett. “If you have a ship or an aircraft out there, but you don’t put a sensor or a series of sensors on those platforms, you have missed an opportunity to collect information to ensure our commanders have better situational awareness. We also think every sensor has to be networked,” he says. Navy leadership recognized that to deliver dominant information capabilities requires a highly skilled, information centric workforce. “We created the Information Dominance Corps—a cadre of information specialists—consisting of more than 44,000 active and Reserve Navy officers, enlisted and civilian professionals who possess extensive skills in information- intensive fields,” explains VADM Dorsett “ According to Dorsett, the Navy is taking an end-to-end approach to the recruiting, retention, and development of personnel in these disciplines.

itution by building on success - Change breeds resistance. As with any head-to-toe transformation, organizations face institutional barriers they must overcome in order to achieve success. “It brings to mind a quote from Niccolo Machiavelli,” ponders VADM Dorsett. “Machiavelli said, ‘There is nothing more difficult to take in hand, more perilous to conduct, or more uncertain in its success than to take the lead in the introduction of a new order of things.’” Dorsett acknowledges that the creation of Information D ominance focus is truly a revolutionary idea. “The institutional barriers,” admits Dorsett, “are nothing unique to the Navy; they are barriers you will see anywhere when you are trying to transform an institution. We can overcome them with progress, with momentum, and with success. Success builds on success.”

Listen to: The Business of Government Hour Interview with VADM Jack Dorsett

Read this profile in its entirety: VADM Jack Dorsett