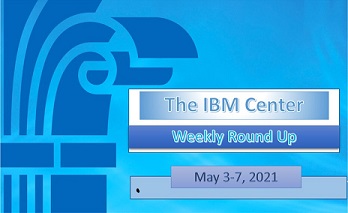 OMB Prioritizes Cyber, COVID Tech For New TMF Payback Model. The federal agencies managing a central fund for loaning money to other agencies to upgrade aging IT—a fund that just received $1 billion from Congress as part of the second COVID-19 stimulus package—released an outline Tuesday updating priorities and making fundamental changes to how the fund works. On Tuesday, OMB and GSA released new details on the fund’s structure going forward and the kinds of projects that will be prioritized. The most significant change will be to the repayment model, which will go from a 100% requirement for all projects to a three-tier approach. From the TMF website.

Integrating open data, open source, cloud drives efficiency. Better integration of three of the federal government’s main strategies -- use of cloud, open-source software (OSS) and open data – would collectively benefit their progress, a new report found. Integrating strategies around open government data, OSS, and cloud computing will help make government information more available to the American public, ensure that government decisions are driven by evidence, and increase the efficiency and lower the costs of government operations,” according to “Aligning Open Data, Open Source, and Hybrid Cloud Adoption in Government,” a report the IBM Center for The Business of Government released May 5 in collaboration with the Center for Open Data Enterprise.

DHS kicks off workforce sprint with push to hire 200 cyber pros. Department of Homeland Security Secretary Alejandro Mayorkas said on Wednesday his agency will begin its 60-day workforce sprint with an aggressive hiring campaign to expand the agency's cadre of cybersecurity professionals. During remarks at a U.S. Chamber of Commerce event, Mayorkas called the effort "the most significant hiring initiative that DHS has undertaken in its history." He also said Wednesday was the first day of the department's workforce sprint.

Navy to update business systems for performance, reduced costs. By modernizing its business systems, the Navy expects to mitigate maintenance issues and delays at shipyards. Some business systems still rely on COBOL, Thomas Harker, the acting Navy secretary, told the House Appropriations Subcommittee on Defense during an April 29 hearing. "We've got to invest in updating those systems. We don't have an electronic time and attendance system ... we've got a lot of problems that we need to fix." Modernized business systems would help enhance performance and reduce costs, Harker said in his written testimony. "Modernization of our information technology infrastructure is a critical warfighting priority," the acting secretary wrote. “Effective use and management of data is key to our digital transformation, and will change how we will fight and win at every level," he added.

DOD expands vulnerability disclosure policy to public networks, IoT devices. The Defense Department is expanding its vulnerability disclosure program to cover all of its publicly available systems, including networks, frequency-based communication, industrial control systems and internet-of-things devices. Sparked by the Defense Digital Service's 2016 Hack the Pentagon initiative, the program was initially restricted to public-facing websites and applications, which limited the number and kinds of vulnerabilities reported. "DOD websites were only the beginning as they account for a fraction of our overall attack surface," said Kristopher Johnson, the director for the Pentagon's Cyber Crime Center, which oversees the program The announcement comes after the center announced a defense industry-focused pilot of its bug bounty program in April. That yearlong pilot is expected to build on lessons from the original vulnerability disclosure program, which has uncovered more than 29,000 vulnerabilities since its launch, according to a recent report.

Lawmakers press for IDEA Act adoption. Ten House Democrats want the Biden administration to pick up the pace on implementation of the Integrated Digital Experience Act.  Passed in 2018, the IDEA Act calls for the improvement of federal websites and the increased use of modern business technologies in government service delivery, including support for digital signatures, online forms and mobile-optimized websites.

Reducing compliance burden supports modernization, former agency chief information officer says. Casey Coleman, former Chief Information Officer at the General Services Administration and a witness at the hearing, said changing or removing outdated IT legislation would allow agencies to focus more on modernization. Coleman said COVID-19 has proven the need for modernization is more urgent than ever and the way to address that need is through the Technology Modernization Fund. To maximize the potential of the fund, organizations must have a modernization plan, get buy-in from leadership, submit business cases and focus on customer- and employee-first thinking, said Coleman.

Commerce digs into supply chain security. Commerce Secretary Gina Raimondo told a House Appropriations subcommittee on Thursday that her department suffered "significant" damage as a result of the SolarWinds attack, and stressed the need for government agencies to invest in a shift towards an intelligence-based cybersecurity approach as well as increasing attention to technology supply chains. The damage "was significant," she said, "and as a result we are taking [cybersecurity] very, very seriously," the secretary said. Raimondo also provided further details about a proposed office within the Commerce Department tasked with addressing vulnerabilities in essential products, stemming from the administration's efforts to secure critical supply chains.

The federal public servants doing groundbreaking work during the pandemic. One person created a State Department task force to repatriate more than 100,000 Americans stranded all over the world when the coronavirus pandemic closed borders and shut down airports. Another led a first-of-its-kind government team that worked with technology companies to combat misinformation about the 2020 U.S. Census. Another oversaw the landing of a rover on Mars. These are three of the 29 finalists for the annual Samuel J. Heyman Service to America Medals, or “Sammies,” one of the highest honors for federal civil servants.

A $4.5B Pool of Economic Recovery Funds States, Localities Can Tap Into. The U.S. Economic Development Administration received an influx of Covid relief dollars over the past year that is more than 10 times the size of its usual budget. That money is now flowing as grants.

Want strategy to succeed? Get the message out. Strategy lives through employees, and they need to hear about the vision and the details through communiques such as infographics, blog posts, message maps, and town hall meetings, writes David Grossman. "Communication is a way to create that excitement and engagement within your team, paving the way for stronger connection to strategy," he writes. LeaderCommunicator Blog

Strategy is great but requires 5 additional steps. Strategy is only one of several steps required for companies to create a plan that's understood and implemented by managers, writes George Bradt. One of the requirements is purpose, which "gets at what matters and why and includes the mission (why), vision (what), guiding principles (how), one of which is the core nature of the business: design, produce, deliver, service," he writes. Forbes (tiered subscription model)

The pandemic forced public speaking to change. The pandemic has given public speakers a chance to reassess their approach, learn new presentation skills and make new connections, writes Nick Morgan. "Forming alliances with other speakers and other professionals in the world of public speaking will allow you to recover more quickly and to do so with the best information available," he writes. Public Words

Launch your words with care so they land well. Conversations and presentations will go better when you cut words that make people feel defensive, avoid absolutes like "nobody" or "best," and stay away from idioms that could be culturally confusing, writes Laurie Cure, president and CEO of Innovative Connections. "Start paying attention to the reactions you receive when speaking and cut out the words and phrases that are spurring a negative response," she writes. Leadership Now

Ask stakeholders about the future, not the past. You can get better feedback from stakeholders when you focus them on what's working, what could improve, what's inspiring them and how to make the business better, writes Paul Cowan. This "feedforward" approach gives "teams a way to feel great about what they've already done and then build on it," Cowan writes. Real Leaders