What Can We Learn About Managing Through Tight Budgets? 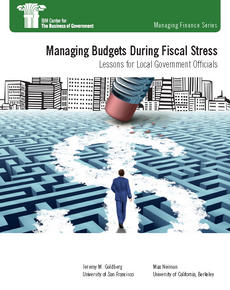 Monday, February 24, 2014
Dan Chenok
Today, the IBM Center for The Business of Government released in insightful report on how California’s budgetary experiences over the past several years can provide lessons learned and roadmaps for other Federal State, and local governments.

On behalf of the IBM Center for The Business of Government, we are pleased to present this report, Managing Budgets During Fiscal Stress: Lessons for Local Government Officials by Jeremy M.Goldberg, University of San Francisco, and and Max Neiman, University of California at Berkeley.

Goldberg and Neiman analyze the financial experiences of California local governments from 2007 to 2013 and present findings and recommendations for managing for governments given budget constraints. Like many local governments across the nation, cities and counties in California were impacted heavily by recent economic problems. This report examines what happened to local California government revenues during this period, which services have been adjusted, how employee benefits have been treated, and what innovations have been introduced.

The report is based on both a web-based survey of 245 California city government officials and face-to-face interviews with chief financial officers in most of the state’s major cities (Sacramento, San Francisco, San Jose, Oakland, Riverside, Pasadena and Los Angeles). The authors write, “There has always been much interest in the state with 12 percent of the nation’s population. The experiences of California provide les­sons for local governments across the nation as they seek to manage the continuing aftershocks of the Great Recession.”

The report makes findings in 14 different areas about the California experience and its applicability to other governments.  The authors then conclude with recommendations for local govern­ments across the nation. These include:

This report continues the IBM Center’s interest in local govern­ment. In 2013, the Center issued A County Manager’s Guide to Shared Services in Local Government, which addresses how local government can save money by improving internal opera­tions.In their survey of local government officials, Neiman and Goldberg found that over 60 percent of respondents rate cost containment as a “very important” or “important” factor in reducing local expenditures in future years.

We trust that this report, along with related IBM Center reports, will assist local government executives as they continue to man­age under fiscal constraints.