How Will Government Adapt? 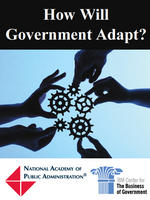 Dan Chenok
A decade from now, how will the government's responsibilities and processes differ?

The National Academy of Public Administration’s November 2014 annual meeting raised a number of key issues facing public administrators in coming years. The IBM Center for The Business of Government collaborated with the Academy to highlight some key findings and takeaways from that meeting.

The focus of its 2014 meeting was “Public Administration 2025: How Will Government Adapt?” A series of speakers and panel sessions explored how what government does, and how it does it, will be different a decade from now. The goal of the meeting was to prepare public administrators at all levels to adapt to this changing environment.

Speakers from the Obama Administration included:

Breakout sessions addressed key issues facing public administrators, including: the changing role of the media, the pervasive effects of technology, the use of evidence to find and fund what works, the expanding use of shared services, and ways to reinvigorate the civil service.