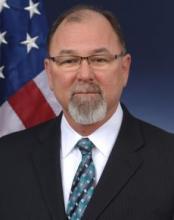 Prior to joining FEMA, Mr. Robinson served as the Associate Director for Management Resources at the U.S. Department of Commerce's National Institute of Standards and Technology (NIST). In this capacity he was responsible for all NIST-wide institutional support and administrative offices and their functions.

After serving over 20 years in the Marine Corps, in 2002 Mr. Robinson continued his career in public service holding a number of top management and executive-level positions in the federal government including Comptroller and Director of Financial Management at the Defense Finance and Accounting Service, Senior Policy and Management Advisor to the CFO at the U.S. Department of Energy (DOE), and Director of DOE's Office of Finance and Accounting.

After being accepted into the U.S. Government's Senior Executive Service (SES), Mr. Robinson was selected to be the CFO and Director of Administration for the International Trade Administration (ITA), also at the U.S. Department of Commerce. In this capacity he was the principal advisor to the Under Secretary for International Trade on matters that span the entire range of financial and administrative management issues facing the bureau.

Mr. Robinson holds a Master of Science degree in financial management from the Naval Postgraduate School in Monterey, California, and is a graduate of North Georgia College & State University where he earned a Bachelor of Business Administration. In addition, he earned the Certified Defense Financial Manager (CDFM) certification and was named Defense Comptroller of the Year in 1996 by the American Society of Military Comptrollers.