Doug Criscitello was sworn in as HUD's CFO on February 16, 2010, bringing with him 25 years of experience in government budgeting and finance. 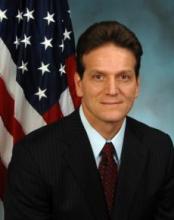 Doug Criscitello was sworn in as HUD's CFO on February 16, 2010, bringing with him 25 years of experience in government budgeting and finance. As CFO, Doug oversees the Department's financial management activities by playing three primary roles: 1) Chief Accountant and Budgeteer -  aimed at ensuring HUD properly controls, spends, and accounts for taxpayer dollars; 2) Financial Risk Manager -  directed at identifying and planning for financial risks, including analytically focused work involving the Department's credit and insurance, rental assistance, grant, and other programs; and 3) Taxpayer Advocate - focusing on ensuring taxpayer impacts are given substantial consideration in the development of HUD's policies and operating procedures.

The common thread of his career is public sector financial management. Within government, he has served in a number of financially involved positions at both the federal and local levels. His most recent position in the public sector was as the founding Director of the New York City Independent Budget Office (IBO), a municipal government agency modeled after the Congressional Budget Office (CBO) to provide nonpartisan, objective research and analysis of NYC's budget. Prior to IBO, Doug spent a number of years as a career civil servant in the federal government focused on financial management and budgeting at the Small Business Administration where he led the establishment of that agency's CFO office, the Office of Management and Budget where he served as a budget examiner in the Housing, Treasury, and Financial Institutions Division, and at CBO where he worked as a budget analyst in the Budget Analysis Division.

From 2000 until his appointment at HUD, Doug worked in the private sector as a consultant and service provider to the federal government. At PricewaterhouseCoopers, he helped establish a public sector financial services practice to support federal financial stabilization initiatives. For most of the past decade, Doug worked in JPMorgan's Governments Institutions Group, where he provided relationship management and operational, investment banking, and financial advisory services to U.S. government agencies and related entities along with multilateral development banks based in Washington DC.

Doug holds a Master of Science degree in public policy analysis from the University of Rochester.