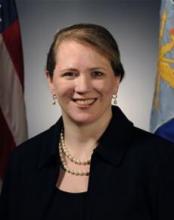 Undersecretary of the Air Force
Department of Defense
United States

Earlier in her career, Ms. Conaton served as the Research Staff Director for the U.S. Commission on National Security/21st Century also known as the Hart-Rudman Commission. The commission was charged by the Secretary of Defense to design a national security strategy for a changing global environment through 2025 and to recommend plans for implementing this strategy. She has held several fellowships to include at the Central Intelligence Agency, where she worked within the Office of Asia-Pacific and Latin American Analysis, and at the National Security Council, where she worked with the office dealing with non-U.S. proliferation and export controls policy. She has also served as a Term Member of the Council on Foreign Relations.