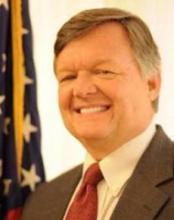 James L. Taylor was confirmed by the United States Senate as the Chief Financial Officer for the Department of Labor on June 22, 2010. Prior to this position, he served as Deputy Inspector General for the Department of Homeland Security, where he assisted the Inspector General in managing over 600 auditors, inspectors, and investigators. From 1999-2005, Mr. Taylor was the Deputy Chief Financial Officer for the Department of Commerce, where he successfully implemented the department’s first integrated financial management system and earned its first clean audit opinion. Prior to his position at Commerce, Mr. Taylor served as the Deputy Chief Financial Officer for the Federal Emergency Management Agency(FEMA), where he helped transform FEMA’s financial operations to more effectively support the agency’s disaster response activities, and achieved its first clean audit opinion. Mr. Taylor has received the Donald E. Scantlebury Award for Excellence in Federal Financial Management, and the Presidential Rank Award of Distinguished Executive. He received his BA from Old Dominion University and an MPA from the University of Delaware, where he was a Public Service Fellow.