Mission of the Military Health System and How Has it Evolved? 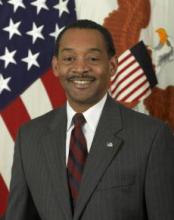 Dr. Woodson ensures the effective execution of the Department of Defense (DoD) medical mission. He oversees the development of medical policies, analyses, and recommendations to the Secretary of Defense and the Undersecretary for Personnel and Readiness, and issues guidance to DoD components on medical matters. He also serves as the principal advisor to the Undersecretary for Personnel and Readiness on matters of chemical, biological, radiological, and nuclear (CBRN) medical defense programs and deployment matters pertaining to force health.

Prior to his appointment by President Obama, Dr. Woodson served as Associate Dean for Diversity and Multicultural Affairs and Professor of Surgery at the Boston University School of Medicine (BUSM), and senior attending vascular surgeon at Boston Medical Center (BMC).  Dr. Woodson holds the rank of brigadier general in the U.S. Army Reserve, and served as Assistant Surgeon General for Reserve Affairs, Force Structure and Mobilization in the Office of the Surgeon General, and as Deputy Commander of the Army Reserve Medical Command.

Dr. Woodson is a graduate of the City College of New York and the New York University School of Medicine. He received his postgraduate medical education at the Massachusetts General Hospital, Harvard Medical School and completed residency training in internal medicine, and general and vascular surgery. He is board certified in internal medicine, general surgery, vascular surgery and critical care surgery. He also holds a Master’s Degree in Strategic Studies (concentration in strategic leadership) from the U.S. Army War College.

In 1992, he was awarded a research fellowship at the Association of American Medical Colleges Health Services Research Institute. He has authored/coauthored a number of publications and book chapters on vascular trauma and outcomes in vascular limb salvage surgery.

His prior military assignments include deployments to Saudi Arabia (Operation Desert Storm), Kosovo, Operation Enduring Freedom and Operation Iraqi Freedom. He has also served as a Senior Medical Officer with the National Disaster Management System, where he responded to the September 11th attack in New York City. Dr. Woodson’s military awards and decorations include the Legion of Merit, the Bronze Star Medal, and the Meritorious Service Medal (with oak leaf cluster).

In 2007, he was named one of the top Vascular Surgeons in Boston and in 2008 was listed as one of the Top Surgeons in the U.S. He is the recipient of the 2009 Gold Humanism in Medicine Award from the Association of American Medical Colleges.