Richard McKinney is the Chief Information Officer (CIO) for the U.S. Department of Transportation (DOT). He was sworn into office on May 13, 2013. 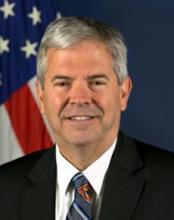 Richard McKinney is the Chief Information Officer (CIO) for the U.S. Department of Transportation (DOT). He was sworn into office on May 13, 2013.

Richard served most recently as a Senior Fellow for the Center for Digital Government. From 2005 to 2011, he was the Government Technology Advisor for Microsoft’s State and Local Government division. Richard served from 1999 to 2005 as Chief Information Officer for the Metropolitan Government of Nashville and Davidson County, a consolidated city/county government. In Nashville, Richard led the Department of Information Technology Services from a “last place” ranking in the 1999 Governing Magazine “Grading the Cities” survey to a top ten finish in the Center for Digital Government annual “Digital Cities” survey starting in 2003.  Nashville remained in the top ten ranking for six straight years.  Prior to working for Nashville city government, Richard was the Director of Information Services for the Tennessee General Assembly from 1995 to 1999.  He served as Assistant Commissioner of Administration for the State of Tennessee Department of General Services from 1987 to 1995.

Richard holds both a Master’s Degree in Public Administration and a Bachelor of Science degree from Tennessee State University. Richard is married and the proud father of five children and five grandchildren.  In his spare time, he is an avid landscape and nature photographer.