Vice Admiral Nathan is the 37th surgeon general of the Navy and chief of the Navy's Bureau of Medicine and Surgery. 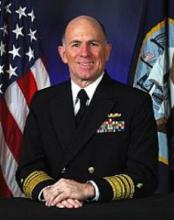 Vice Admiral Nathan is the 37th surgeon general of the Navy and chief of the Navy's Bureau of Medicine and Surgery.

Nathan received his Bachelor of Science degree from Georgia Tech, and his Doctor of Medicine from The Medical College of Georgia in 1981. He completed internal medicine specialty training in 1984 at the University of South Florida before serving as the Internal Medicine department head at Naval Hospital Guantanamo Bay, Cuba. In 1985, Nathan transferred to Naval Hospital, Groton, Conn., as leader of the Medical Mobilization Amphibious Surgical Support team. In 1987, Nathan transferred to Naval Medical Center San Diego as head, Division of Internal Medicine with additional duty to the Marine Corps, 1st Marine Division.

In 1990, he served as a department head, Naval Hospital Beaufort, S.C., before reporting to Naval Clinics Command, London, U.K., where he participated in military-to-military engagements with post-Soviet Eastern European countries. In 1995, he was assigned as specialist assignment officer at the Bureau of Naval Personnel, providing guidance to over 1,500 U.S. Navy Medical Corps officers. In 1998, he accepted a seat at the Joint Industrial College of the Armed Forces located in Washington, D.C., graduating in 1999 with a Master’s degree in “Resourcing the National Strategy.” Nathan went on to serve as the fleet surgeon, Forward Deployed Naval Forces, Commander, U.S. 7th Fleet, aboard the flagship USS Blue Ridge (LCC 19), out of Yokosuka, Japan. In 2001, he transferred as deputy commander, Navy Medical Center Portsmouth, Va.

In 2004, Nathan assumed command of Naval Hospital Pensacola with additional oversight of 12 clinics in four states where he oversaw Navy medical relief efforts following Hurricanes Ivan, Dennis, and Katrina.  Despite all facilities receiving crippling blows, his command still garnered the TRICARE/DOD award for “highest patient satisfaction in a medium-sized facility”. In June 2006, he transferred as the fleet surgeon to the Commander, U.S. Fleet Forces Command, instrumental in organizing the Fleet Health Domain integration with the Fleet Readiness Enterprise while providing medical global force management.  In 2007, Nathan was assigned as commander, Naval Medical Center Portsmouth and Navy Medicine Region East with command of over 18,000 personnel and an operating budget exceeding $1.2 billion.